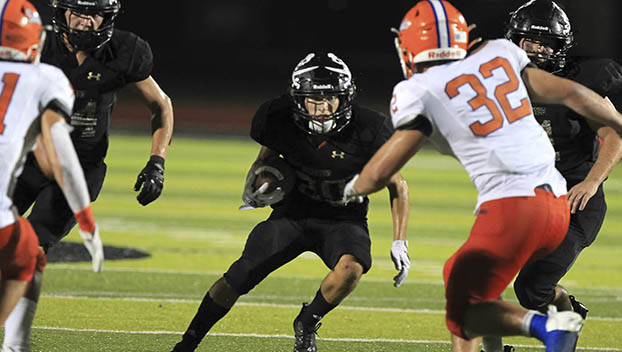 VIDOR – After cashing in on their first win of the season, the Vidor Pirates are carrying that momentum into the final non-district game.

The Pirates (1-3) close out non-district when they travel to Addison, just north of Dallas, to take on Trinity Christian Academy (0-4) at 2 p.m. Saturday.

Vidor was clicking on all cylinders last week and throttled the Lake Charles St. Louis Saints 51-21.

The Pirates piled up 476 total yards, 446 coming on the ground. Defensively, they were stingy, allowing the Saints just 192 total yards.

“That was the type of game we’ve been looking for,” said Vidor coach Jeff Mathews. “Everything we worked on in practice last week paid off. We cut out those turnovers that were killing us and had a lot less penalties.”

Mathews was impressed with the Pirates ground attack.

Quarterback Jarrett Odom had his best game of the season and he made great reads all night, Mathews said.

“We played the brand of Pirates football we like to play,” said Mathews. “Our field position was so much better than what it was those first three weeks because we didn’t shoot ourselves in the foot. We like to control the tempo, and that is what we did. Our defense played well, too. The good thing is I think we only had 34 defensive plays, so that kind of tells you what the offense was doing. All phases of the game were really clicking.”

The Pirates have a longer week of practice due to this week’s Saturday game.

“We can’t get complacent. There is still so many things we need to improve on,” said Mathews. “The holding penalties are still bringing us down some. We had three or four of those the other night. We have to correct that because we’re not the type of offense that does well in second or third-and 20 situations.”

Mathews and the Pirates are slowly finding out more about the private school they are taking on Saturday.

“Trinity Christian has some good looking kids and two of their losses are against private school powerhouses and the other two games they could have won that were tight,” said Mathews. “Offensively, they line up in what seems to be 1,000 different formations and they do a variety of things. Defensively, they like to base out of the 50. They are scrappy and we just can’t go in there thinking we’ve got it easy.”

One cool thing about the trip is where the Pirates are playing.

“They play on Tom Landry Field, it doesn’t get any better than that,” said Mathews. “Our kids may not know about Tom Landry, but we’ll be discussing that on the road trip because most of us coaches know all about that great man.”

Mathews just wants the Pirates to continue to show improvement. They will have their bye next week before opening up defense of their District 10-4A Division I title at home Oct. 7 against the Little Cypress-Mauriceville Bears.

“Non-district is always good and you gain a lot of knowledge on where you are at and look at ways to get better,” said Mathews. “District is when it counts though. We would love to go into that LC-M game with some momentum. We open district with the Bears and then go to Lumberton the next week. That’s two huge games with our two biggest local rivals right out of the chute. It’s going to be a very interesting district and you better be ready to battle every single week.”