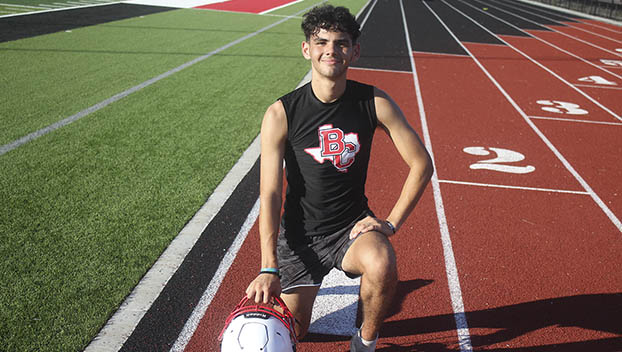 Bridge City junior Victor Hernandez has stayed busy as the kicker for the Cardinals and also their top runner on the cross country team. (Van Wade/Orange Leader)

He simply wouldn’t have it any other way.

Hernandez is a busy young man in the Cardinals athletic program.

He has been an outstanding kicker for the football team and has made a strong statement as a standout on the Cardinals Cross Country team.

He doesn’t just wrap things up in the Fall either, he plays for the Cardinals soccer team in the Spring and also runs for the track team.

“I like to stay busy and I love to participate and push myself in everything I do,” said Hernandez. “I like to set goals and try my best to achieve them.”

Hernandez had just finished doing his long training morning in cross country Monday and then was running full-length football field sprints with the football team.

“It’s just part of my routine now,” said Hernandez. “You get used to it. It’s definitely been humid, but that just makes you stronger.”

Hernandez loves his kicking duties for the Cardinals, and he had a tremendous season as a sophomore last year.

“My Mom sort of talked me into it when I was in eighth grade because all of my years in soccer and she felt I could do it,” said Hernandez. “It’s been a blast ever since.”

Hernandez has basically been automatic on his point-after attempts ever since he picked the game up. He has also shown solid range on his field goal attempts.

“With just a tee kicking it, I’m pretty good from 45 to 50 yards out,” said Hernandez. “In a game situation, with the snap and the hold, I really feel comfortable from the 35- to 40-yard range. With more work, I really feel I can get better than that.”

He was a 4A Region III qualifier as a freshman and a sophomore and looks to up the ante this season.

“I remember being on varsity as a freshman and we had a lot of seniors,” said Hernandez. “They really pushed me hard and I wanted to show them I could be a good teammate. I learned a lot from those guys about the sport and how to pace myself during the meets.”

Hernandez has gotten off to a blazing start as a junior, racking up several top-five finishes at meets, including a pair of second-place finishes. He ran a personable best 17 minutes and 43 second at the Nederland Meet recently.

“I felt really good at the Nederland Meet, but I know I can get my times lower than that if I keep pushing myself,” said Hernandez. “My goal now is to run a sub 17:30 and I know I can get there.”

“When Victor has a goal set, he’s going to chase it,” said Cardinals Cross Country Coach Bryan Bozeman. “You could just see his work ethic, even when he was in junior high. He’s one of the most coachable kids we’ve had here. He’s always not only striving to make himself better, but his teammates as well.”

Of course, Hernandez has more lofty goals then just getting his time down.

“We have some really good competition in our district,” said Hernandez. “Beau Waldrop of Lumberton, who is a senior, is always the guy to beat and he’s been a great one. I would love to hang with him close at district. Vidor has a couple really good runners and so does Silsbee. You really have to be at the top of your game against those guys. I would love to get to Regionals again and I really believe I can. But the ultimate goal is to get to State, that would be awesome and I’m going to try my best to get there.”

Hernandez had his long training workout in which he ran close to six miles Monday and then Tuesday would be more of a speed day.

“It’s good to have coaches that help you juggle the schedule around so I can be a part of two teams,” said Hernandez. “I probably average running 15 to 20 miles a week, not counting the meets, and still get plenty of time to get my kicks and special teams assignments in at practice.”

Hernandez is eager for spring as he will be a part of two more sports.

“I can’t wait for soccer season because that is my passion for sure, I’ve been playing ever since I was 4,” said Hernandez. “I’m excited about being a Captain and I really think we’re going to be really good. We were young last year, so almost everyone is back. We get to play on our home turf this year since the field is done, and we’re excited about that.”

Last season on the track team, Hernandez concentrated on the longer distances – the 3,200 and 1,600 meters. This coming season he would like to try something new.

“I like a challenge,” said Hernandez. “I’ve really been working to get quicker. I still plan on running the 1,600 but I’m really eager to give the 800 meters a shot.”

Hernandez is a member of the Honor Society and is in the top three percent of his class.

“That is so important and it gives you structure,” said Hernandez. “It shows you can accomplish a lot when you put forth effort. Academics are definitely a key because I still want to either kick or play soccer at the collegiate level and grades are important. They help you when it comes down to the schools you want to go to.”