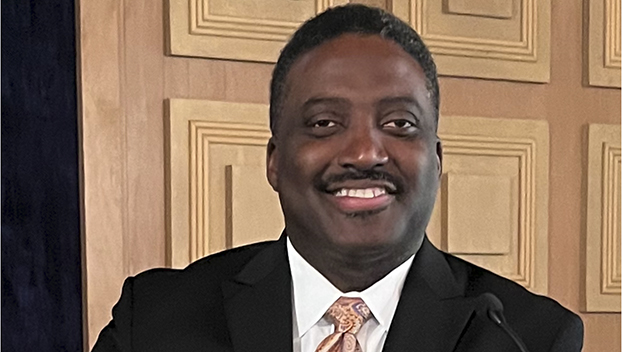 For Pastor John Mark Stevens, being attentive to spiritual awakenings is one’s way of transcending the ordinary, sense of self to encompass a wider, infinite sense of truth or reality.

“I normally tell people that if you cannot explain something, then it is the Holy Spirit,” Stevens said. “Within one week, I had heard that the church was vacant, but I had no intention of coming toward Orange, but then the church kept tugging at my heart. Then, I had heard from another person that a church was looking for a pastor, and when I inquired after the church, it was the very same church. It stuck out to me that hearing about a church that I had never went to would be the Holy Spirit leading me to it.”

Mount Sinai Baptist Church was the church in question, and after five years of being led by interim pastors, the congregation hired Stevens as the man to lead the church in Orange County.

Stevens’ calling to become a pastor began in his dreams as a little boy. He would be at the podium preaching, which is funny, because he did not like public speaking.

The atmosphere in the dreams was upbeat, and people would be clapping and singing.

Stevens’ father was a pastor at Blue Light Baptist Church on Lake Street in Lake Charles.

“My grandfather was a pastor, too,” he said.

Stevens said the dreams persisted. However, his father’s death has a major impact.

“He died in my arms when I can home from school that day,” Stevens recalls. “I can remember holding my daddy in the living room. He was dead already, but I said I would preach until the day I died. I was 17 years old, and six months later I was preaching. The boy with the speech problem made a life commitment to do the thing he hated the most, and that was talking in front of people. But I took that chance to be laughed at and I have been preaching ever since.”

Stevens said it is God’s way of telling him dreams were going to be the way they communicate.

“My dreams always came true,” he said. “My mother died when I was young, I was maybe five. I dreamed of her in a casket, and sure enough, I remember going to a funeral and I saw my father talking the same as he did in the dream. I looked over his shoulder, and my mother was in the casket. So, my dreams have a tendency of coming true or it is symbolic of something else.

“If there is urgency, God will send a similar dream to my wife. When she tells me about it, I say that I dreamed that, too. I know that I need to listen to the message. My wife journals her dreams so that we can see if we have common messages sent to us.”

Stevens began his career at Saint James Baptist Church in New Iberia, Louisiana, and others churches as he grew older. His schedule would have him at the first church at 7 a.m., the next church by 9 a.m. and the last by 11 a.m.

“Before I was married, I just ran until I was tired,” he said. “I would sleep off my burnout then go play golf or attend a football game. Afterwards, I would go back to the church to be put back on the schedule. My version of a vacation was attending the national convention. I just enjoyed going to church, worshipping and attending the classes.”

It was not until he met his future wife that he finally took a real vacation.

Stevens learned that his promise to his dad did not mean a life confined to just preaching.

Stevens’ goal is to bring a revival to the Mount Sinai Baptist Church.

“My goal is to reach out to the youth,” Stevens said. “I want to show them that they can still have fun and still be a Christian. It does not work to tell them to go read the Bible. God instructs us to be fishermen of men, and when you fish, you must put good bait out. Every fisherman knows that you must have bait for each type of situation, whether it be deep, shallow, fresh or saltwater.”

Stevens studies modern musicians and speaks to his kids about what is trending to keep his sermons relevant for the youth.

“The challenge is to find topics that they can relate to,” he said. “And the youth ministry is taking them to bowling alleys and football games to keep them involved in the church. History is known to repeat itself, and there is nothing new under the sun that has not happened in the past. So, we look at the Bible and research how the issue was dealt with, then to get an idea of how to confront the problem now.”