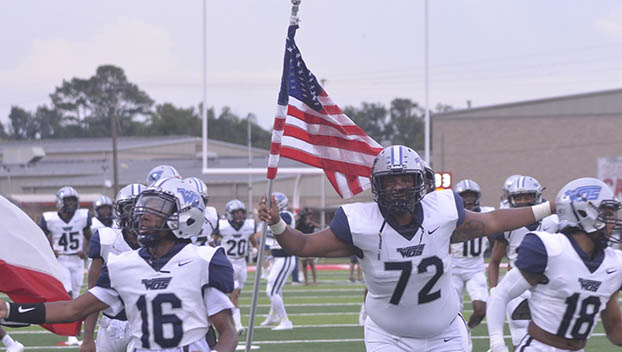 The West Orange-Stark Mustangs and the Newton Eagles battled down to the wire Friday night in Newton. (Courtesy photo Tricia Stroud)

NEWTON – It was another typical heavyweight fight between the West Orange-Stark Mustangs and the Newton Eagles Friday.

It was the Eagles that had the final answer though with a superb drive at the end of the game as Newton grabbed a 24-21 victory over the Mustangs.

The Eagles (3-1) put together a 14-play, 81-yard game winning drive that chewed up 5:23 off the fourth quarter clock. Running back Leighton Foster had six carries for 45 yards on the drive, including a critical seven-yard gain on a fourth-and-6 play that got to the Mustang 3. Foster sealed it with a three-yard touchdown romp over the left side and then converted the two-point conversion run to give the Eagles the three-point edge with 1:28 left.

The Eagle defense forced the Mustangs (2-2) out on downs to end it.

“It was tough because we were not able to take advantage of some good situations when we had the ball on Newton’s side of the field,” said Mustang head coach Hiawatha Hickman. “Defensively, I thought both teams played really well.”

“Newton hit us on a couple big plays, like that Hail Mary on that long first down play in the first half,” said Hickman. “They got us on another big pass play in the third quarter. Newton has some athletes and if they catch you slipping or off-guard, they can hit you with a big play and that was the difference.”

Mustang quarterback Marcus Turner, Jr. completed 11-of-19 passes for 129 yards and three touchdowns. Running back Jailen Brown had 82 yards on 19 carries while Raymond Mallett, Jr. had 28 yards on eight totes.

Foster led the Eagles on the ground with nine carries for 64 yards. Newton quarterback Maliek Woods completed 4-of-14 passes for 86 yards but two of the completions were long touchdown bombs. He also had 42 yards on 10 carries while running back Tyler Porter added 32 yards on 12 carries.

The Mustangs lived on Newton’s side of the field in the first quarter and eventually cashed in late in the period.

WO-S drove from its own 32 to the Eagle 15 on the first series of the night in 11 plays. However, Newton had back-to-back sacks to end the threat. Mustang standout running back and defensive back Jamaal Shaw went out for the rest of the game on the series with an ankle injury.

The Mustang defense rose up well, forcing the Eagles into a three-and-out.

The WO-S offense then was able to navigate 51 yards in 11 plays to get on the scoreboard.

Sophomore running back Mallett, Jr. had 25 yards on three carries, including a big nine-yard gain to the Eagle 10. Just when it looked like the Eagles were going to hold again, Turner, Jr. spotted wide receiver Nicholas Crosson over the middle for a 10-yard touchdown strike on fourth-and-10. Jalen Gilmore booted the extra-point, giving the Mustangs a 7-0 edge with 0:54 left in the first quarter.

Newton eventually got nice field position after taking advantage of a Mustang personal foul after a punt return, getting the ball at the WO-S 46.

Woods was able to get loose on a 24-yard keeper that reached the Mustang 15. After a couple incompletions and a false start and holding call, the Eagles were looking at a fourth-and-24 from the 25. Woods, however, was able to complete his only pass of the half when he hooked up with receiver Raylin Adams along the right side of the end zone where Adams outleaped a pair of WO-S defenders to haul in the 25-yard touchdown toss.

Foster raced in for the two-point conversion, handing the Eagles a 8-7 lead with 3:28 in the half.

After pinning the Eagles deep after a nice punt by Gilmore, the Mustangs were able to cash in on a turnover when defensive back Dakarion Judge pounced on a Eagle fumble at the Newton 18. Two plays later Turner, Jr. saw receiver Andrew Cooper get loose over the middle and hit him in stride with a 19-yard touchdown connection. Brown stormed in on the two-point conversion run, making it 15-8 with 1:01 left.

Turner, Jr. completed 7-of-9 passes for 55 yards in the half. Brown rushed for 50 yards on 13 carries while Mallett, Jr. had 27 yards on five carries.

Woods led the Eagles with 30 yards on three carries and completed 1-of-8 passes that was the 25-yard touchdown.

Newton regained the lead with a seven-play, 72-yard scoring march the second time they had the ball in the third quarter.

Foster ripped off a 13-yard run to the Eagle 47. Woods then found receiver Westin Gipson on a 13-yard toss that got to the Mustang 46. Two plays later Woods teamed up with wide open receiver in Heiko Malone along the right side. Malone sprinted into the end zone untouched from 42 yards out. Foster converted the two-point conversion run, giving the Eagles a 16-15 edge with 5:47 in the third.

The Mustangs countered with a quick four-play, 68-yard drive to regain the lead. The Mustangs big-played the Eagles when Turner, Jr. had a nice scramble and hit streaking receiver Darren Anderson on a 56-yard touchdown bomb along the left side. The two-point conversion run failed but the Mustangs led 21-16 with 3:35 in the third.