Bridge City tangles with Raiders in road trip to Lumberton 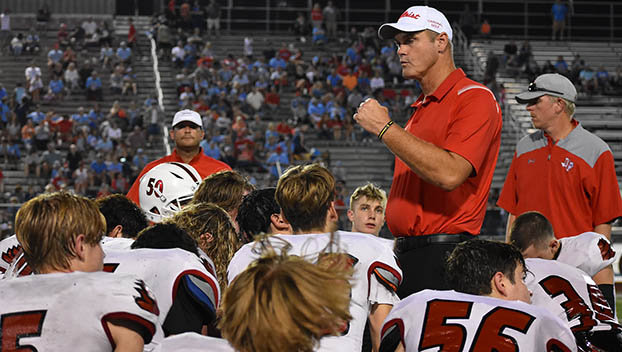 LUMBERTON – It was a tough road trip for the Bridge City Cardinals Friday night to wrap up non-district play.

Lumberton was clicking on all cylinders as the Raiders rolled past the Cardinals 56-7 at Raider Stadium.

“We lost some key individuals early on tonight, and that had a lot to do with it,” Cardinals head coach Cody McGuire said following the loss. “But I have to give Lumberton a lot of credit. They came out and dominated all phases of the game.”

There were hardly any bright spots to take away from Bridge City’s rough night. The Cardinals offense was locked down and held to just 60 yards of offense in the first half, only finding the end zone once. Compare that to a Raiders offensive unit that put up 35 points in the first half alone, and the numbers speak for them self.

Led by sophomore quarterback Lucas Powell, Lumberton struck on the second play from scrimmage with a deep 63-yard touchdown pass, hauled in by Brady Fuselier. The Raiders made it a two-score game midway through the first quarter with a three-yard touchdown rush by Jaddon Ward.

Things began to go awry for Bridge City when starting quarterback Hutch Bearden exited the game with an arm injury on their first drive. Josmany Robleto replaced him to guide the Cardinals offense, but the Lumberton defense held their opponent in check for nearly the entire game.

The Raiders scored two more times to end the first quarter — once on a 38-yard touchdown reception by Cole Rhodes, with the second touchdown coming from a 69-yard punt return by Trey Kersh.

The Cardinals’ lone highlight in the first half came when defensive back Rayburn Hebert made a diving catch to intercept a tipped pass.

Lumberton continued to bolster their lead heading into halftime as Fuselier snagged a seven-yard pass in the end zone, putting the Raiders up 35-0.

The trends of the first half carried over into the third quarter. Lumberton’s offensive fireworks continued as Powell connected with Kersh for a 12-yard touchdown.

The Cardinals wouldn’t go down in a shutout, though. At the midway mark of the third quarter, Robleto threw a beautiful pass down the right sideline, hitting junior receiver Jerris Brown in stride for a 40-yard score. However, they still trailed 42-7 and wouldn’t find the end zone again for the remainder of the night.

Despite having the game firmly under control, the Raiders continued to run up the score. Powell scrambled for a four-yard touchdown near the end of the third quarter. The second-stringers entered the game for Lumberton, and after a 45-yard punt return put them inside the Cardinals’ five-yard line, Michael Tate punched it in for yet another house call.

After the 56-7 drubbing, McGuire knows what needs to happen as the Cardinals prepare for their district opener at Hamshire-Fannett.

“We’ve got seven days to prepare, so we’ve got to get busy,” McGuire said. “When bad things happen, somebody’s got to step up. We’ve got guys who can step up, and they will.”

Bridge City will travel to Hamshire-Fannett for a showdown with the Longhorns, Sep. 23, at 7:30 p.m.