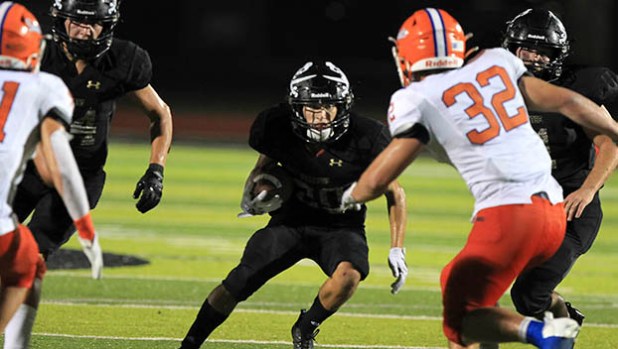 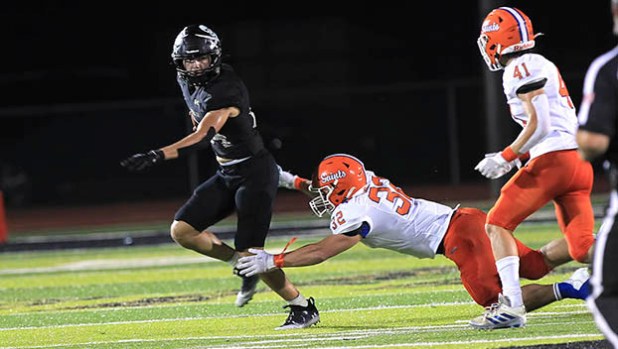 VIDOR – It’s something they have been striving for the last four weeks and the Vidor Pirates finally earned it.

Getting a top-notch rushing effort on offense, the Pirates nabbed their first victory of the season by rolling past the Lake Charles St. Louis Saints at Pirate Stadium Friday night.

Vidor’s offense looked explosive with 446 rushing yards as a team as the Pirates (1-3) handed the Saints (2-1) their first loss.

Vidor coach Jeff Mathews was proud of the overall effort.

“Our defense was on top of their game and the offense had plenty of chances to take advantage,” said Mathews.

The long-time coach was proud to nail down that first win of the season too.

“We really played a complete game in all phases for the first time all season and I’m super proud of them,” said Mathews. “We cut out the penalties and turnovers that really hampered us the first three weeks. We’ve got one more non-district game to get ready for district play and I know we’ll be ready to compete.”

Daigen Venable led the Pirates in rushing on the night, powering ahead for 91 yards on 17 carries, and led the team in receiving yards with a 30- yard touchdown catch. Jason Watson would also tote the ball 17 times and go for 87 yards. The Pirate backfield was busy, totaling 476 total yards.

Defensively, the Pirates were on their ‘A’ game, allowing just 192 yards total, and just 36 coming on the ground. The Pirate defense forced a safety after a blocked punt and even snagged an interception while they were at it.

The Saints were held in check, and a big reason the Pirates won, thanks to the defense.

The Saints relied on wide receiver Brooks Habetz for their yards. Quarterback James Reina only find him three times, but Habetz got 106 yards on those three catches. Habetz’ efforts wouldn’t get the team the win, but he had a great game.

The Saints got on the board quickly with an opening drive that only took 56 seconds off the clock. A toss to James Reina, who launched a deep ball to Habetz gained 37 yards and a quick first down. Hank Milligan finished off the drive with two quick runs and a touchdown from a yard out as the Saints took a7-0 lead with 11 minutes left on the clock in the first quarter.

The Pirates answered right back with a methodical drive right down the field, collecting seven first downs throughout the drive. The run game was pumping, Watson and Venable were being the heart of the horse power.

Dane Villadsen pushed the ball through from a yard out to finish the drive. The point-after went through, making the score 7-7 with 6:34 left in the first quarter.

Vidor recovered a fumble in the Saint’s backfield, and got prime real estate inside the opposing 20. Venable punched out a nine-yard run to get things going, and Watson would finish it with a one -yard push for the touchdown. The PAT went through and the Pirates took a 14-7 lead over the Saints with three minutes left in the first quarter.

The Pirates extended the lead with another time consuming drive down the field, daring the Saints to stop their run game. Venable had the majority of the carries,, punching it up the middle time and time again. Venable broke for a 14-yard run, but the longest run of the drive would come from Isaac Fontnow with a big 31-yard run to break open the drive. Venable capped it from seven yards out for a touchdown as the Pirates led 21-7 with just under nine minutes left in the half.

The Saints got a big play, with a pass over the top of the Pirate defense. Reina found Habetz gain, this time for 68 yards and touchdown. After the PAT, the Saints were down 21-14 to the Pirates with eight minutes left in the half.

The Pirates make it a two-score game again, as they pounded the ball down the field, picking up right where they left off last drive. This time the quarterback, Jarrett Odom, would get involved in the run game, breaking off a 13-yard run, the longest of the drive.

Vidor scored some points defensively after shoving the Saints back into their own end zone. The Pirates’ special teams create two points as they got a safety on a punt blocked out of the end zone.

The Pirates score after an interception from Brayden Root and the Pirate defense. After Root’s interception, Vidor got the ball at the Saints 44. Dane Villadsen breoke off around the outside on the first play and scored from 44 yards out. Venable ran in a two-point conversion to make the score 38-14 with 6:30 left in the third quarter.

The Pirate offense kept their foot on the gas as they threw their first pass of the game, and it connected for a touchdown. Venable kept up his rushing attack on the drive, toting the ball consistently for the Pirates. After getting the drive started, Odom took his chance with a roll out pass to find Venable over the middle and wide open. Venable would haul it in for a 30-yard touchdown catch, giving the Pirates a 45-14 edge with two minutes left in the third.

Vidor kept the scoring going another scoring drive midway through the fourth quarter. Fontnow was the the workhorse this, breaking a big 25- yard rush to put the offense in scoring position. Brayden Norton capped it off, scoring from five yards out with just under nine minutes left.

The Saints got their score in the half with a big pass over the Pirates defense. Reina found wide out Trey Tate for a long 45-yard touchdown pass, after forcing the Pirates to punt for the game’s final score.

The Pirates will wrap up non-district next Saturday when they visit Trinity Christian.