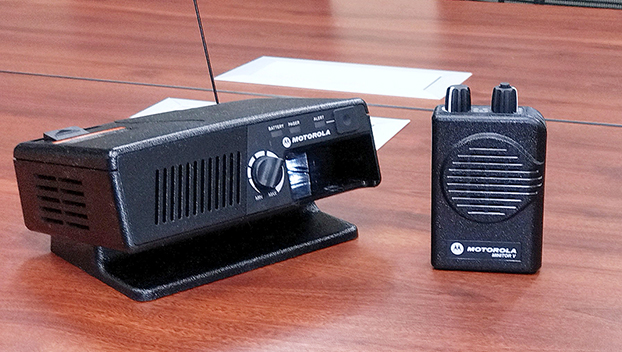 Nederland City Council recently approved a set of voice pagers as surplus, thus allowing NFD the chance to help their fellow firefighters by donating them.

The donation includes VHF Motorola voice pagers, chargers and related equipment. The pagers were purchased by Nederland in 2012 as part of a “Narrow-banding” project, Nederland City Manager Chris Duque said.

“These pagers are now obsolete and have been replaced by a cell phone app and a backup via the City’s email.  The Bridge City Volunteer Fire Department still utilizes this technology and has requested the donation of the pagers, charges, and related equipment,” he said..

Bridge City Chief Ricky Bodin said the donation is a big help and shows the cooperation between the region’s first responders.

“Even though the volunteer fire department is an emergency service, we have limited funds. Them (Nederland FD) being able to donate is really a big help with alerting for our volunteers,” Bodin said.

The donation keeps Bridge City from having to use funds that are earmarked for even more critical needs.

Currently, when there is an emergency, dispatch will call out, and those with the pagers receive the info over the radio. They also use a text-based internet app over their phones, but this only provides very basic information, the chief said.

The pagers, Bodin said, allow personnel to hear the radio traffic from dispatch, which in turn helps with communication and awareness.

Nederland Fire Chief Terry Morton said the department had a house-cleaning project and personnel were looking through a storeroom and found the pagers. The devices hadn’t been used in approximately 10 years but are functional.

The first step was for the City of Nederland to declare the items surplus in order for the donation to be made.

After NFD was through using the pagers, firefighters went to a different alerting method, using the city’s email that had been setup to convert the message to a text message.

From there the text goes to their phones.

“These (being donated) actually have voice and can be activated from the station. It can give the situation, the address and what people need to do, such as report to station or report to the scene,” Morton said.

NFD, as well as Groves and Port Neches, are currently using an app system for notifications, Morton said.

The Bridge City Volunteer Fire Department will pick up the donation next week, Bodin said.