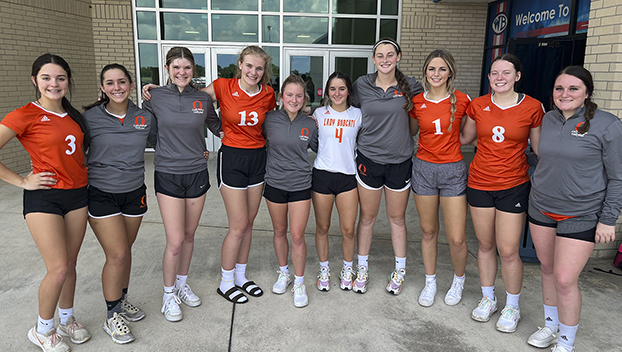 The Orangefield Lady Bobcats have made excellent strides at the net as the 2022 season has progressed. (Photo courtesy Orangefield Volleyball)

ORANGEFIELD – After being a solid playoff team out of District 22-4A last season, the Orangefield Lady Bobcats look to do the same after moving back down to the Class 3A level.

The Lady Bobcats, who had quite a bit of inexperience at the varsity level to start this season, have started out District 22-3A action with some flair.

In their first two matches, they could be called the “Cardiac Lady Bobcats” after long-time coach Ashlee Peevey saw them squeeze out back-to-back five-game victories.

“They made me nervous, I think they just like playing volleyball and like the long matches,” laughed Peevey. “It’s definitely a good start, and we want to continue that winning trend. I think our district this time is a lot tougher then it was when we were in the district a few years ago. There are several well-rounded teams.”

Peevey was curious to see how the Lady Bobcats would perform during a rugged non-district schedule.

“Not that we were a young team, because we have several seniors and juniors, we just had seniors and juniors that had not played on the varsity level,” said Peevey. “There were some good tests, and it has been fun to watch them gel. They worked so hard in trying to gain their own identity of who they wanted to be out on the floor. I’m so happy with the progress they have made.”

Senior hitter Mackenzie Haley has been a huge spark at the net, igniting the offense.

“Mackenzie has been so explosive for us and she’s the type of hitter any coach would want 10 of,” expressed Peevey. “She had a good year last year but she worked so hard this offseason to improve. She has done that and then some. She’s a powerhouse at the net.”

Greenlea Oldham is another Lady Bobcats standout, known more for her basketball skills. However, she’s turned herself into a pretty “strong volleyball player,” according to Peevey. “She put in some work in the summer that has paid off and she has really come into her own and is a spark for us.”

Brianna Moore has set the tone with her setting duties.

The best thing about Moore is her soaring confidence level.

“Last year, she wasn’t too sure of her self, but the experience was awesome for her,” said Peevey. “This year, she has really took command of the offense and she really gets everyone the ball in the right spots.”

Of course, there is senior Harleigh Rawls, who gets it done all over the court.

“Harleigh Rawls, what more can you say about her, she is an extreme competitor and always has that extra gear, whether it is hitting a big shot or setting up a teammate,” said Peevey. “She’s so fierce on defense and will try her best to chase every ball down. She is leaving a mark, not only in volleyball, but basketball, softball and track. She’s just a tremendous athlete.”

The Bobcats take on East Chambers on the road Friday before welcoming in district and state power Hardin on Tuesday.

“The district race is going to be a good one and I think this team has the passion and desire to really play well the rest of the way for sure,” said Peevey.