All Hail to “The Woman King” 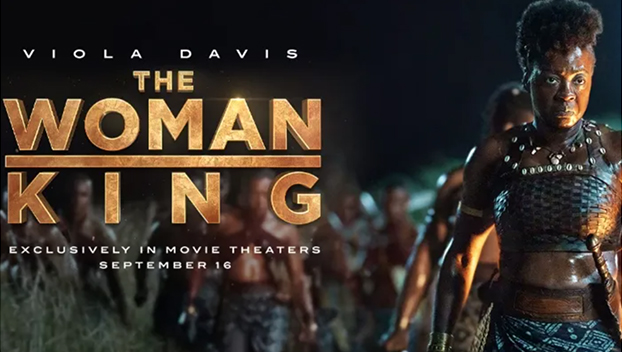 “The Woman King” is a story about a ferocious band of female warriors who protect their kingdom in colonial-era Africa. I’m guessing the filmmakers won’t take issue with noting this is the real-life group that inspired the Dora Milaje in the “Black Panther” movie.

The difference between the two films is “The Woman King” puts more focus on the acting and arrives with a patina of serious art. Don’t worry, there are plenty of bloody battles, but this movie seems to be interested in far more than just popcorn filmmaking.

Viola Davis stars Nanisca, the leader of the Agojie warriors who protect the kingdom of Dahomey. They are waging war against a neighboring kingdom, but the real villains are the European colonialists working the slave trade.

Nanisca warns her king (John Boyega) the Europeans are not to be trusted.

Nanisca is not alone in her fight. She has a fierce sister-warrior at her side (Lashana Lynch) and a new recruit (Thuso Mbedu) whose backstory gives the film much of its emotional heft.

Credit director Gina Prince Bythewood for investing the time in these characters. Not only does this make the film into a satisfying drama, but it also gives the action sequences real stakes.

We’ve come to care about these characters, so we care about whether they survive the bloody melees. That’s no small feat, as the battles are thrilling, well-staged sequences that will put audiences on the edge of their seats.

Perhaps that shouldn’t be a surprise as Bythewood last directed “The Old Guard,” but I came into the movie thinking that it would be more of a historical drama than an action film. Credit the filmmakers for giving us both.

And credit Viola Davis for yet another superb performance. Her central character is an appealing warrior hero, flaws and all. Davis is adept at showing us the pain behind her fearsome war cries.

She is a powerful character, one who would truly compel her fellow warriors to follow her into battle.

The other notable aspect of the film is its historical base. Dahomey was an actual kingdom, and the army of Agojie warriors were so feared in real life they became the stuff of legend.

I get the feeling that much of the rest has been created in order to make a better story, and there are certainly some thorny elements that are glossed over in favor of our hero’s journey, but the film ultimately brings enough historical touches to make this into an adult-level drama instead of just another teen-focused action flick.

Once again, credit the ladies behind “The Woman King.” The amazing cast, the writer and the talented director all team up for a thrilling movie that doesn’t insult your intelligence.

All hail “The Woman King.”