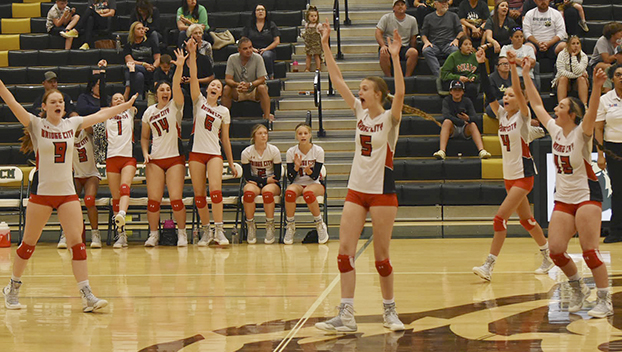 LITTLE CYPRESS _ It took two nights and a great match to finish up the District 22-4A volleyball battle between the Bridge City Lady Cardinals and the Little Cypress-Mauriceville Lady Bears at LC-M High School.

After the Lady Cardinals won the first game Tuesday night and were leading in the second first game on Tuesday night, the power went out at LC-M and the remainder of the match was shifted to Wednesday.

Demi Carter led the Lady Cardinals with 24 kills to go along with 13 digs and 12 aces.

Anna Kelly notched 21 kills and had six digs and three aces. Taryn Doiron had a whopping 33 assists and had 11 kills and seven digs.

Rylee Sherman had nine kills, a block and an ace for the Lady Pirates.

Brianna Moore set up the offense well with 24 assists and Rawls chimed in with 16.

Oldham powered her way to five blocks while Lela Francis had two. Thurman led the team with four aces.

Haley led the offense with 19 kills, while Oldham notched 12.

Moore put together 28 assists while Rawls had 16.

Thurman led the way with 17 digs, with Haley contributing 14 and Rawls and Kaylea Gravett adding 12 apiece.