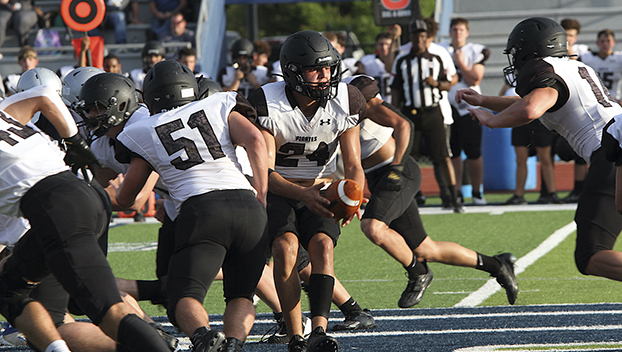 VIDOR – After a tough start to the season, the Vidor Pirates look to iron out some kinks when they welcome in the Lake Charles St. Louis Saints in a non-district battle Friday at Pirate Field.

Last week in a 34-12 loss to Brazosport on the road, the Pirates, like they were in their first two games against Silsbee and Santa Fe, were snake-bit by turnovers and penalties.

Two quick turnovers by the Pirates early in the first quarter gave Brazosport a fast 14-0 lead, and the Exporters forced the Pirates to play catch-up the rest of the way.

“We really feel we still have a really good football team,” said Pirates head coach Jeff Mathews. “We just keep making mistakes that our opponents are not creating. We’re doing it on our own, that’s what has been tough.”

The Pirates moved the ball well at times against Brazosport but couldn’t cash in for six points due to miscues.

“It was frustrating because we moved the ball well all night, we averaged 5.1 yards a carry,” said Mathews. “We had the ball 10 times. Eight of those drives ended in either in turnovers or penalties ended them. We scored on the other two.”

Mathews said the Pirates had a great first day of practice this week and all the players want to improve.

“We have really been working on stopping all of those false starts,” he said. “In our offense, you never like to get behind the chains. Over the years, we’ve been pretty good at that and it is something we really want to straighten out before Friday.”

The Saints are riding some momentum, coming in after posting victories against Crowley (49-22) and Iota (14-11).

“They like to run the spread, but they mainly like to run out of it,” said Mathews. “Their quarterback is a tough one to handle. He has a good arm but he really thrives on taking off and running with it.”

Mathews is referring to James Reina, who has darted for 246 yards and six touchdowns on 44 carries and has completed 10-of-22 passes for 188 yards and a TD.

“Defensively, they are the smallest team we’ve faced so far, but they can fly around the football,” said Mathews. “We just need to do what we do and move the ball up and down the field without those mistakes that have really killed us. We plan on really straightening that up and look to play well.”

Mathews likes the mindset of the Pirates.

“The kids are still here every day working to improve, and they are hungry to get better,” said Mathews. “We scheduled this non-district schedule to help get us better. Not making excuses, but the first three teams we played are 8-1 and we have a 2-0 team coming in here Friday. District is right down the road and that’s when everything gets real and I think we’re going to do just fine.”