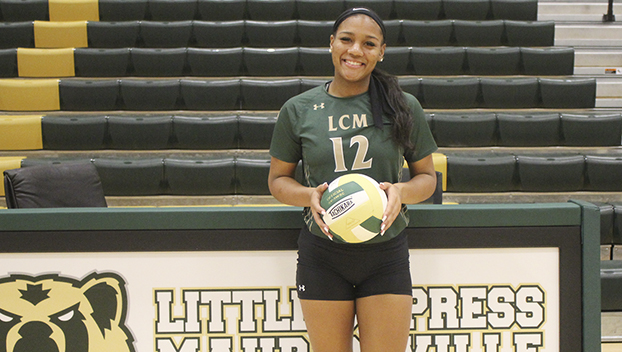 Little Cypress-Mauriceville senior Chrissy Joseph is enjoying her final run as a Lady Bears as she will be a key cog in three different sports in the Lady Bear program. (Van Wade/Orange Leader)

LITTLE CYPRESS – Wanting to have a blast and racking up victories in her senior year, Little Cypress-Mauriceville’s Chrissy Joseph is just in Phase One of three phases this season.

Joseph, a two-time All-Orange Leader Volleyball Team member and all-district selection, is trying her best to lift the Lady Bears to another playoff berth with district just now cranking up.

She will also play basketball this year after being on varsity as a freshman and sophomore before sitting out last year. After hoops season, she will move on to track, where she looks to defend her district title in the shot put.

“I stay busy with all three sports, but it is so much fun, getting to play with and work hard with all of my friends,” said Joseph. “It’s not like I juggle all three sports at the same time, even though they can run into each other at the end of the seasons.”

“She’s just a super athlete and an even better kid,” said Peevey. ‘She has some hops and can really sky. She’s a force on the volleyball court and she can make some great shots. She keeps the other teams off-balance, because they don’t know if she is going to smash it or just dink it over.”

Right now, Joseph is honed in on leading the Lady Bears and head coach Rhonda Williams to yet another playoff berth.

“We’re really starting to come around lately and we’re getting better,” said Joseph. “We had a tough preseason schedule that really helped, and some of our younger players have really shown improvement. We’re looking to make a run in district and get back to the playoffs.”

“That was a big confidence boost,” said Joseph. “In most tournaments in the past, we always seemed to settle for third or fourth, so that was exciting last weekend. We got in a bunch of matches, which was great. It was a good final preparation before getting into district play the rest of the season.”

Joseph has always been one of the top kill and block leaders in Orange County.

“It’s a great feeling when you find that open spot, whether it is a hard smash or a big tip,” said Joseph.”I like to keep our opponents guessing.”

Joseph is excited about getting back on the basketball court this season.

“The team was really good last season and had a great run,” said Joseph. “We have some really super players back. I’m hoping I can give them some help in the middle, like rebounding and shot blocking.”

Joseph feels the biggest transition is going from volleyball to basketball.

“We practice almost two hours in volleyball every day, and Coach Williams always has us in good shape,” said Joseph. “The big thing is that volleyball, you are only playing on one half of the court. In basketball, you are running full-court all the time. My tongue is always hanging out in a hurry when I first start basketball, because that is a lot more running involved.”

Peevey said Joseph is going to be a big asset to the basketball program.

“We have a lot of key players back, and with her returning to patrol the middle, we’re all looking forward to another excellent season,” he said.

Joseph will make an easy transition to shot put in the spring after the Lady Bears hopefully make a nice basketball playoff push.

She was consistently throwing more than 36 feet last season en route to the district title.

“Shot put, that’s always been pretty easy for me because I feel like I’ve always been pretty strong,” said Joseph. “I got even better my sophomore year when I was able to get down a few new techniques. I’m looking forward to an even bigger year this time after making Regionals last year. I would love to wrap up my senior year at the State Track Meet.”

Joseph will continue to pursue a college degree when she graduates. She is currently taking some classes at Lamar State College Orange.

“I’ve always had an interest in nursing and I’m taking some classes in that field,” said Joseph. “Recently, process engineering has really peaked my interest. I like both, so I know I have some decisions to make.”