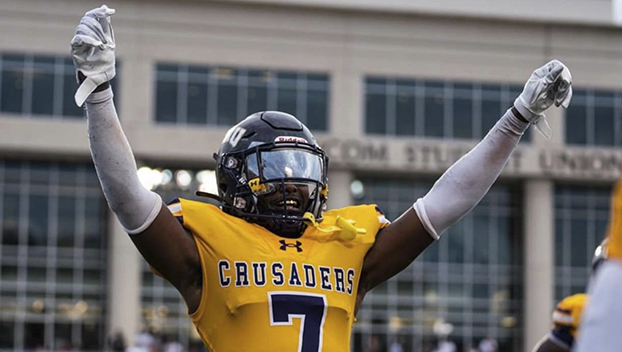 Miller hauled in nine catches for 109 yards in the Crusaders’ tough 28-24 loss to Wisconsin Whitewater over the weekend.

However, with his big outing, Miller became the all-time leader in receptions at the school with 156.

He only needed two receptions going in to set the new mark.

“It’s still sort of surreal to become the school’s all-time leading receiver,” said Miller. “I was more focused on trying to get the win than a personal record though. Looking back on it, it is a tremendous accomplishment and something to be proud of when you look at it down the road.”

Miller and his Crusaders teammates are now trying to rebound after a tough loss and saw their 21-game winning streak come to an end.

“We usually meet these guys in the playoffs down the road, and hopefully we’ have an opportunity to play them again,” said Miller.

Looking to finish off a wonderful college run, Miller was named to the D3football.com Preseason All-America Team.

A senior return specialist and slot back, he earned three all-America awards last season as the Crusaders went on to win the National Championship. He was also an all-region and all-conference selection, earning American Southwest Conference Special Teams Player of the Year.