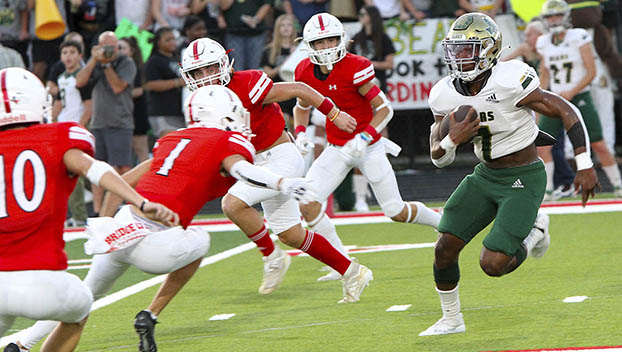 However, this week, it’s going to be lengthy one.

The Bears (2-1), coming off a 41-7 victory at Bridge City, are making a long trek to take on the Houston Kincaid Falcons (1-2) Friday night.

LC-M is looking to pull out all the stops this week before heading into their bye week next week.

Good news is the Bears get to practice on their new turf at Battlin’ Bear Stadium by Monday of next week.

“Our biggest concern this week is how the kids are going to respond with a two-and-a-half hour road trip and coming off two emotional back-to-back games against Orange County rivals the last couple weeks,” said LC-M coach Eric Peevey. “Another issue this week is we have several kids battling a stomach virus. We’ve got kids that are not at school and we just want them to get back healthy.”

The Bears are coming off a Bridge City game in which they scored 27 unanswered points in the second half to turn back the Cardinals.

“It was a good win,” said Peevey. “We started that game out flat, but the kids stepped up in the second half. We still have some young kids that need to realize it is a 48-minute game and that just comes with the territory. We’re still looking to clean up a few things, especially the penalties. We had way too many of those last week.”

Now the Bears turn their attention to the Kincaid Falcons.

Kincaid, a powerhouse in the private school ranks, was a stepping stone for the Bears last season. LC-M downed the Falcons 49-20 at home.

“That game last year was the turning point for us, where the kids realized that we were pretty good. It was a huge confidence builder,” said Peevey. “They had about three NCAA Division I players on that team last year, and we played our tails off. It kind of set the tone for us the rest of the way.”

The Falcons are battling injuries and have lost a pair of tight games in 2022.

They fell at Jasper in the season opener when the Bulldogs connected on a Hail Mary pass to win it. Kincaid bounced back to defeat Tomball Christian 30-14 and fell to Archbishop Shaw 21-12 last week.

“They are younger this year and they have been in every game,” said Peevey. “Their first and second team quarterbacks have both got hurt and they were using their third string kid last week.”

However, there is one player the Bears defense must gear up for and that’s running back Micah Bell.

“That Bell kid can flat-out go and you’ve got to keep him in front of you are he will be heading for six,” said Peevey. “The kid has committed to Notre Dame and he is one of those guys you want to contain. Four, five, six yard-gains you can almost live with; it’s those 60-yarders you have to worry about with him.”

Peevey says the Falcons bring it on defense.

They line up in different fronts, whether it is a three-man, four-man or five-man and they love to bring pressure.

“They have really played well all season,” said Peevey.

Peevey is counting on the Bears to load the bus Friday, head to Houston and compete.

“It’s that time of the year where you start getting those bumps and bruises, and the kids need to recover and bounce back as long as there are no major injuries,” said Peevey. “This is one of those games where you have to fight hard and just battle. We really want to play well. It’s a tough trip, and we’re battling some sickness. If we can push through, we’ll head into our bye week next week, get a little healthier and get to practice on our new field. There is a lot to look forward too.”