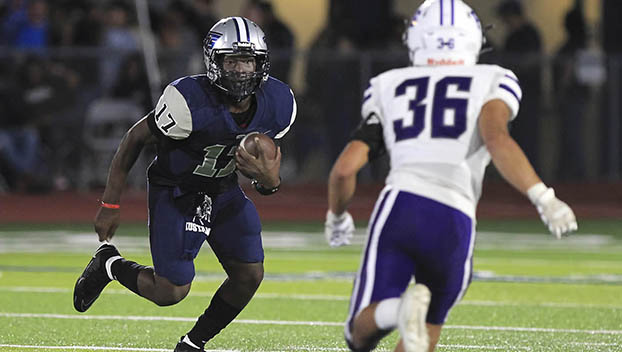 WEST ORANGE – It was tough sledding for the West Orange-Stark Mustangs last Friday night after absorbing a 27-6 loss at the hands of the Port Neches-Groves Indians.

The Indians controlled the line of scrimmage throughout the night as the Mustangs (2-1) were looking for answers on both sides of the ball.

They will look to bounce back this week as they travel to Newton to take on the highly touted Eagles (2-1).

WO-S coach Hiawatha Hickman felt the Mustangs learned a lot with their battle against PN-G.

“With their size, they were going to give us some issues up front. If we didn’t get started fast, it was going to be a problem,” said Hickman. “We knew it was going to be tough. We just didn’t play well. We came out flat after playing an emotional game against LC-M, and that shouldn’t be an excuse. We should be ready every time we take the field. PN-G came out and hit us in the mouth early, and we didn’t respond well. We’re better than that.”

The Indians kept the ball away from the Mustangs with its grinding running game.

“They got away from the pass after we stopped it pretty well and once they found out they could run right at us, they took advantage of it,” said Hickman. “They physically controlled up front. We also sputtered on offense, especially in the first half. We’ve got to get back to playing 48 minutes and I think we will.”

Newton had a nice win last week, knocking off next-door neighbor Jasper 20-6. It was a bounce-back win for the Eagles, who had fallen to Woodville 23-22 the previous week.

“Newton is a tough place to play, and we’ve had so many great battles over the years,” said Hickman.

The Eagles offense is paced by quarterback Maliek Woods, who has completed 22-of-37 passes for 312 yards and a touchdown. He has also rushed for 127 yards and two TDs on 30 carries.

“The Woods kid is mobile and they can do a lot of things with him,” said Hickman. “It’s a typical Newton offense. They still like to run the ball a lot, but they also like to lull you to sleep then hit a big pass over the top.”

Leighton Foster is Newton’s lead back. He has 200 yards and two TDs on 31 carries.

“Foster is probably their best overall player,” said Hickman. “He goes both ways and is a beast at linebacker. You have to find where he is at on both sides of the ball during the whole game.”

Defensively, the Eagles like to force the action, rushing at the opposing offense at the line of scrimmage with their entire front eight and then relying on their secondary to play man-to-man defense.

“Newton has been doing that for years and years and they love to bring the entire kitchen sink at you,” said Hickman. “We’ve got to be able to find a way to hit those quick plays to get them off-balance so we can offset the pressure they can bring.”

Newton will be the last tune-up for the Mustangs before they enter district play with a trip to Silsbee Sept. 23.

“We learned a lot from the PN-G game and realized that there are plenty of things we need to either correct or get better at this week in practice,” said Hickman. “Newton is our fourth big test of a very tough non-district schedule. Our non-district gets us ready for those upcoming big district games, when each game counts. Silsbee is not even on our minds yet, we’re just focused on playing Newton this week and trying to get better in every facet of the game.”