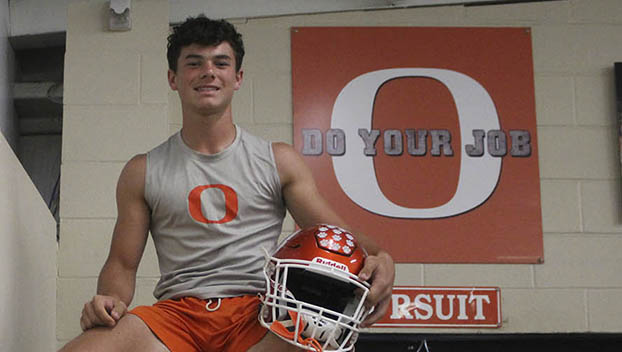 Orangefield junior Mason Houghton is a key ingredient for the Bobcats in every facet of the game. (Van Wade/Orange Leader)

ORANGEFIELD – When the Orangefield Bobcats need someone to step in, junior Mason Houghton has no problem ringing the bell.

A standout special teams player and starting outside linebacker, Houghton proved he could step in at tailback, as well.

Houghton played a huge role in helping lead the Bobcats to a 42-28 non-district win against Shepherd last Friday.

First, he got loose on an 83-yard punt return for a touchdown with 7:01 left in the third quarter to push the Bobcats lead to 28-8.

“(Shepherd) bottled me up pretty good the first punt I handled,” said Houghton. “I was looking for that opportunity the next time, and the blockers up front opened it up for me. Jackson Humplik had a huge block on the return. I barely remember a lot of it, I just ran as fast as I could. It was an amazing feeling and my first varsity touchdown, ever.”

Houghton got his second touchdown 14 minutes later when he helped the Bobcats seal it with a 55-yard touchdown gallop from the tailback spot with 3:01 left to make it 42-22 Bobcats.

“As soon as Brayden (Parker) handed me the ball, I looked up and all I could see was open daylight,” said Houghton. “Our offensive line had a huge night, but that hole, right then, was the biggest one I’ve ever seen in my life.”

Houghton had to step in after starting tailback Gavin Perry-Koci went out with an injury.

“We knew we were in good hands when Mason had to step in there,” said head coach Josh Smalley. “Mason is a kid that always makes the most of his opportunities. He had about a 70-yard run against Legacy Christian the week before and we knew he would be just fine this week. That punt return, that was special.”

Houghton is glad to fill any role.

“I knew when Gavin went down, I had to step up, that’s what we all do as Bobcats, we have each others’ backs,” said Houghton. “I love special teams. The coaches moved me up to varsity as a sophomore and thought I could help them, especially on special teams. That really helped me grow and I went into this season with a lot of confidence.”

Smalley kicked back and enjoyed the effort Houghton put in during the offseason.

Houghton has definitely settled into his outside linebacker role.

“You have to be a pretty physical player to play there and there is a lot of contact,” said Houghton. “Coach (Jake) Nash, he’s a great linebacker coach. He prepares us so well, week-in and week-out. He really keeps us up-to-date about our assignments and reads.”

“I love being involved in our church, it just makes me feel really good,” said Houghton. “I’m part of the parking lot team. What I really love the most is being a mentor during our Kids Church time. All of those kids kind of look up to you and I like to set a good example.”

Houghton wants to push forward his leadership skills to teammates.

“I like to really help the younger players and show them how much confidence I have in them,” said Houghton. “I was fortunate as an underclassman to be guided and helped by guys like Tyler Shearin and Tyler Washington. Those guys were great in building me up and making myself believe in things that I could do. I want to be that same kind of guy.”

Houghton and the Bobcats face Woodville in their final non-district game Friday. Orangefield opens up district play the following week when the Buna Cougars come calling to F.L. McLain Stadium.

“Woodville is a tough team, always,” said Houghton. “Playing teams like that makes you better, and we’re looking forward to matching up with them. We’re really looking forward to district to see what we can do. The goal is to win district and win in the playoffs. I think we are capable of it, we just have to keep working hard and maintain our focus.”