Little Cypress-Mauriceville, Bridge City go at it in front of packed house 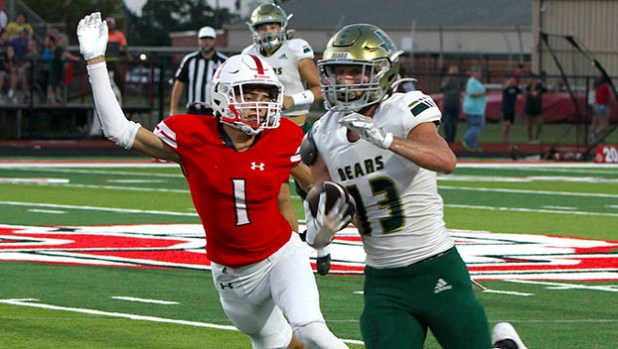 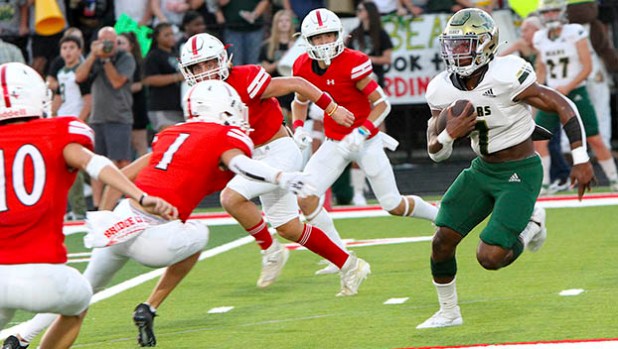 LC-M running back Da'Marion Morris (7) finds a seam as he heads toward the end zone to give LC-M an early 7-0 lead against Bridge City.(Tommy Mann, Jr./Orange Leader)

BRIDGE CITY – After getting all they could handle from the Bridge City Cardinals in the first half, the Little Cypress-Mauriceville Battlin’ Bears pulled away for a 41-7 victory at Larry Ward Stadium Friday night.

LC-M outgained the Cardinals 250-31 in the second half.

LC-M senior quarterback Dean Reynolds completed 15-of-28 passes for 262 yards. Bear senior running back Da’Marion Morris darted for 142 yards on 18 carries and scored three touchdowns and had a big interception. Bear receiver Elijah Allison hauled in seven catches for 113 yards and a touchdown while Jacob Pollock had two critical catches for 54 yards.

“We came out flat to start, especially after such an emotional game last week,” said LC-M coach Eric Peevey. “We had a lot of penalties in the first half and we were just out of sync. Give Coach (Cody) McGuire and the Cardinals some credit, they really played hard and made some big plays and stops in the first half. We’re still making some young mistakes but in the second half we started to gel and Dean made some nice throws and we were able to move the ball. Da’Marion had another great game and we were able to get some more guys in late to give him some rest. Jonah Fuller ran hard for a sophomore and he’s going to be a good one and he made plays on defense too.”

Bridge City quarterback Hutch Bearden completed 8-of-19 passes for 87 yards and rushed for 27 yards on 13 totes. Fullback JS Bearden was the leading BC ground gainer with 48 yards on 12 carries. The Cardinals finished with 179 yards.

“Our defense was really strong the whole second half and Jackson Smith gave us some momentum with his interception early in the third,” said Peevey. “We were able to get some more pressure on Bearden in the second half and we were able to control their running game better. It was a good effort, we just need to continue to get better and work on stopping some silly mistakes because we had a ton of penalties.”

The Bears jumped on the scoreboard fast with Morris’ legs on the first series of the night. On fourth-and-5 from the LC-M 41, Morris scooted around the left side and went 59 yards untouched for the touchdown. Lucas Wright booted the extra-point, giving the Bears a 7-0 edge with 10:58 in the first quarter.

On their next possession, the Bears moved all the way down to the Cardinal 8 with Reynolds completed a pair of passes for 39 yards, including a 27-yarder to Jacob Pollock. However, standout Cardinal linebacker Mason Pruitt sacked Reynolds for a seven-yard loss on third down, backing the ball back to the 15. Wright came in to attempt a 32-yard field goal but it fell short with 2:52 in the first quarter.

The Cardinals promptly responded with a 11-play, 80-yard scoring march to draw even.

Bearden had a big 13-yard pass to Cale Breaux that kept the drive going deep in Bear territory and then connected with Noah Broussard for a 10-yard gain to the LC-M 8. Three plays later JS Bearden bolted around the left side for a six-yard touchdown romp. Victor Hernandez booted the extra-point, tying it at 7-7 with 10:58 in the half.

The Bears went back up again with a short five-play, 46-yard drive. Morris carried four times for 28 yards and capped it with a two-yard touchdown dart up the middle, making it 14-7 with 4:31 in the half.

On the next series the Cardinals looked like they were in business when Bearden and receiver Gavin Bodin teamed up on a 30-yard pass over the middle that got to the Bear 25. Morris ended the threat on the next play when he picked off a Bearden pass at the 3 with 0:56 in the half.

The Cardinals had 86 yards in the air with Bearden completing 7-of-14 passes. JS Bearden led the ground game with 32 yards on nine carries.

The Bears capitalized on a Cardinal turnover to start the second half when LC-M defensive back Jackson Smith picked off a Bearden pass at the Bear 30 and returned it to the Bear 39.

Reynolds completed two passes for 39 yards including another 27-yarder to Pollock on fourth-and-8 from the Cardinal 47. Pollock made nice moves down the left sideline to get to the BC 20. Three plays Morris zipped up the gut of the Cardinal defense for a nine-yard touchdown, pushing it to 21-7 with 7:59 in the third.

After holding the Cardinals on fourth down deep in Bear territory, LC-M cranked out a seven-play, 76-yard scoring drive sparked by Reynolds’ arm.

Reynolds hit Kyler Garlaska with a 23-yard strike to the Cardinal 47. Allison hauled in a 11-yard pass to the 41 and running back Jonah Fuller snagged a 20-yard reception to the 11. Two plays later Reynolds broke a couple tackles along the right side for a 11-yard touchdown, making it 28-7 with 2:18 in the third.

LC-M hit a big play the next time they had it when Reynolds hit Allison in stride down the left sideline for a 61-yard touchdown bomb to up the lead to 34-7 with 0:05 in the third.

After the Cardinals muffed a punt at their own 34 the Bears scored four plays later with all the yards accounted by Fuller on the ground, including a 10-yard touchdown jaunt up the middle, making it 41-7 with 4:47 left. Fuller finished with 67 yards on eight carries.

Both teams will be hitting the road next Friday. The Cardinals will venture to Lumberton to face the Raiders while the Bears make a long road trip to Houston Kincaid.