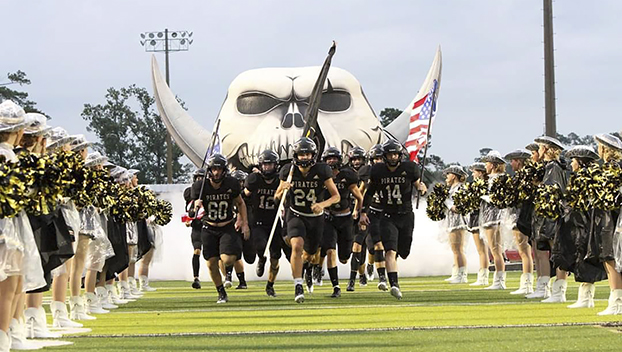 FREEPORT – Early turnovers and the legs of Brazosport running back Xavier Butler were too much for the Vidor Pirates to overcome Thursday night.

Butler found the end zone four times for the Exporters and rushed for 194 yards on 16 carries, leading his team to a 34-12 win over the Pirates.

The Exporters (2-1) took advantage of two first quarter turnovers by the Pirates (0-3) and stopped two Vidor fourth down plays on the Brazosport side of the field in the first half to take a 14-0 edge into the half.

Brazosport finished with 330 total yards, 261 coming on the ground. The Pirates collected 217 yards, 206 coming via the ground.

Exporter quarterback Randon Fontenette rushed for 57 yards on seven totes and completed 6-of-11 passes for 69 yards.

Fullback Jason Watson led the Pirates ground game with 82 yards on 15 carries. Ricky Gall had 11 carries for 50 yards and Daigen Venable had 42 yards on 11 totes.

Pirates quarterback Jarrett Odom had 32 yards on 13 carries and completed 1-of-5 passes for 11 yards.

The Exporters picked off a Odom pass on Vidor’s first series and marched down the field on a seven-play, 70-yard drive.

Butler got loose on a 53-yard scamper with Vidor defenders catching him at the Pirates 11.

It looked as if the Pirates were going to be able to hold the Exporters off, but Fontenette got off a desperation pass on fourth down from the 11 and found receiver Michael Edwards in the back of the end zone for a touchdown. The point-after kick was good as the Exporters grabbed a 7-0 edge with 4:35 in the first quarter.

Brazosport cashed in on another Vidor miscue. Pirates fullback Jason Watson fumbled at the Pirates 31 on the ensuing series, and the Exporters found the end zone again in five plays. Butler capped it with a nine-yard touchdown dart, pushing the lead to 14-0 with 2:31 in the first quarter.

After the score there was a 30-minute lightning delay.

When the schools came back out both teams rose up on defense as neither team scored again in the half.

Vidor got into Brazosport territory twice late in the half but the Exporters stopped the Pirates as they couldn’t convert on fourth down.

The Pirates had all of their yards on the ground.

Jason Watson and Ricky Gall each had 39 yards apiece while Odom had 20.

The Exporters utilized Butler’s legs again on the first play of the third quarter as he escaped and got loose on a 43-yard touchdown dart, upping the lead to 21-0.

Butler completed a four-play, 67-yard drive when he broke away from the Pirates defense for a 31-yard touchdown gallop to make it 28-0 with 8:39 left in the third.

The Pirates took advantage of a Brazosport fumble late in the third quarter to get on the scoreboard.

Watson completed a five-play, 15-yard drive when he muscled his way in from a yard out on the first play of the fourth quarter. The two-point conversion run failed, making it a 28-6 game with 1:58 remaining.

However, Butler struck again when he bolted 51-yards for another touchdown scoot, pushing the score back up to 34-6 with 11:43 left.

Vidor scored again when the defense pounced on another fumble at the Exporters’ 9. The Pirates scored two plays later when Gall bruised his way into the end zone from six yards out, making it 34-12 with 4:43 left.

The Pirates will return home next week to host Lake Charles St. Louis.