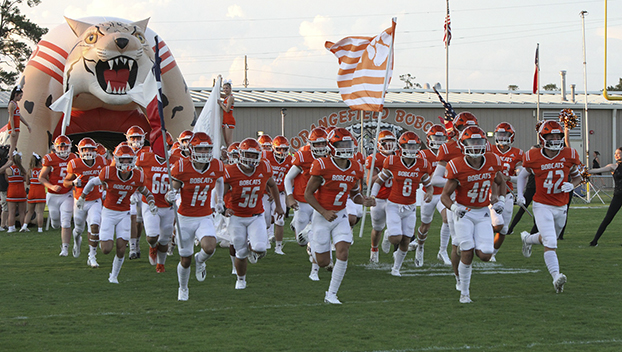 ORANGEFIELD – Big plays were had for the Orangefield Bobcats throughout the night as they took down the Shepherd Pirates 42-28 at F.L.McLain Stadium Friday.

Sparked by big, long plays by Cameron Dischler and Mason Houghton, the Bobcats were able to build a big cushion.

The Bobcats had their ground game churning early to get out to a 21-0 edge.

Quarterback Brayden Parker capped off an early drive with a one-yard touchdown keeper, making it 7-0 with 6:31 in the first quarter.

Bobcat fullback Case Singleton finished off another sound march by bruising his way into the end zone from five yards. The Bobcats missed the extra-point but led 13-0 with 8:44 in the half.

Dischler got in on the scoring act with a one-yard touchdown dart and he converted the two-point conversion run to make it 21-0 with 1:27 in the half.

The Pirates, however, retaliated late, getting a touchdown and a two-point conversion to trim it to 21-8 with just 0:18 in the half.

The Bobcats utilized some explosive plays to pull away in the second half.

Houghton electrified the Bobcat crowd when he cruised past the Shepherd special teams for a 83-yard punt return to make it 28-8 with 7:03 in the third.

Dischler put some icing on it when he broke loose on a 82-yard touchdown gallop, pushing it to 35-8 with 11:21 remaining.

The Pirates tried to scrap back a little, scoring a touchdown with 7:30 remaining and then added another after a Bobcat fumble to trim it to 35-22 with 5:34 left.

Houghton then sank the Pirates’ sails when he zipped 55 yards for a touchdown with 3:01 left.

The Bobcats will hit the road for the first time next Friday when they visit Woodville to face the Eagles.