Demi Carter is a powerful force for Lady Cardinals; see what the junior standout has planned next 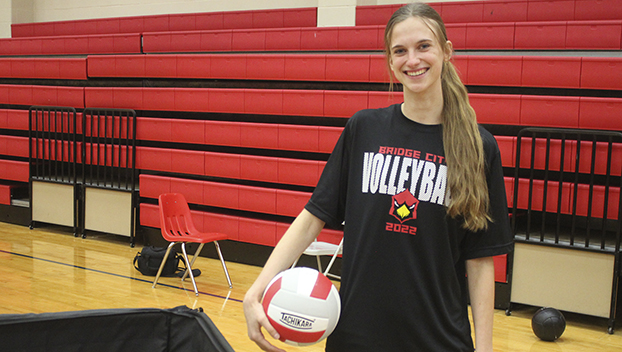 Bridge City junior hitter Demi Carter has flourished for the back-to-back District 22-4A champion Lady Cardinals and looks to be a key cog in leading them to another district crown. (Van Wade/Orange Leader)

BRIDGE CITY — Volleyball fans at Bridge City have watched a talented but raw and timid freshman on varsity turn into an unimaginable force as a junior.

Junior hitter Demi Carter’s game continues to be on the rise as she looks to be a part of a third straight Lady Cardinals district championship.

“Wow, time has flown by so fast,” said Carter. “I remember when Coach (Becca) Peveto told me I was going to be on varsity as a freshman, and that was insane I thought at the time. The games were being played so fast, and it took me awhile to get used to the speed. Fortunately for me I had some great teammates to help me along. It was great to be a part of such a special group. We were basically all together the last two years and we accomplished a lot.”

After a solid campaign as a freshman, Carter, who stands at 6-2, really took off when district play started as a sophomore.

“What really helped me last year is that the team felt more comfortable in what I could do,” said Carter. “It made me relax a little more that they believed in me and I just took off from there.”

Lady Cardinals coach Savanah DeLuna has tabbed Carter as a captain this season.

“She has really soaked in the leadership role because we do have such a young team this year,” said DeLuna. “She’s killing it in that role and all of the kids respect her.”

“We have so much young talent, and our freshmen are awesome,” said Carter. “I do all I can to give them advice and tips because I remember how tough it was to be a freshmen. They just keep getting better and you can see their confidence building.”

As a freshman, Carter towered at the net. Last year everyone watched her overall game improve and this year she is flourishing.

“Demi, we call her our horse, she’s so tall and nobody can really match up with her at the net,” said DeLuna. “It’s so hard to get the ball past her with her blocking skills. She is really smashing the ball from all over, whether it’s the front row or back row. She has turned into an amazing server, and her defense, as far as digging, is where she has really improved. She’s just a top-notch. all-around player, and think, she’s still just a junior.”

Carter credits a lot of her game to Lady Cardinals senior setter Taryn Doiron, who is arguably the best setter in Southeast Texas.

“Taryn is unbelievable in setting me up. We are always communicating, and she always knows where I’m at and where I will be coming from,” said Carter. “I have so much trust in her in getting the perfect set, she’s so magical in what she does.”

Carter is proud to have worked to improve her overall game, but she still has one favorite thing.

“There is nothing quite like getting an awesome kill, one that I can really get a hold of,” said Carter. “What I like the most is that it ignites the crowd and gets everyone on the team fired up.”

Carter picked up volleyball in junior high and it has been a major part of her life ever since.

“I always played basketball when I was small, plus I was always tall so I thought I would go for basketball and I really didn’t know much about volleyball,” said Carter. “I decided to go out for the team in seventh grade and I just fell in love with the game. I was about 5-9 in middle school and I was six feet by the time I was a freshman. I felt awkward at times but I knew I would eventually grow into my body and get stronger and the hard work has paid off.”

“She just eats it up every day and is the type of kid that you appreciate and love to coach,” said DeLuna. “She’s also a tremendous student-athlete. She makes top-notch grades, and her teachers are always reminding me of how great of a student she is, it’s just constant praise.”

Carter has a nice goal after she graduates.

“I really want to continue to play volleyball somewhere I can get the degree I want,” said Carter. “At home, we raise farm animals. I just love being around them and taking care of them. I’m such an animal person. I definitely want to major in Animal Science wherever I go.”

First things first, Carter and the Lady Cardinals have a streak they want to continue as they are seeking their third straight district title.

“We were really great the last two years with a very experienced team of great players,” said Carter. “We are much younger this year, but I see so much talent. Everyone is working so hard to get better. We know everybody is going to try their best to knock us off because we’ve been on top the last two years. If we just continue to play together and communicate on the court, we’re going to be tough to beat. It would be awesome to win it again with so many new faces.”