Pirates looking to bounce back against Brazosport Thursday night, see the keys to victory 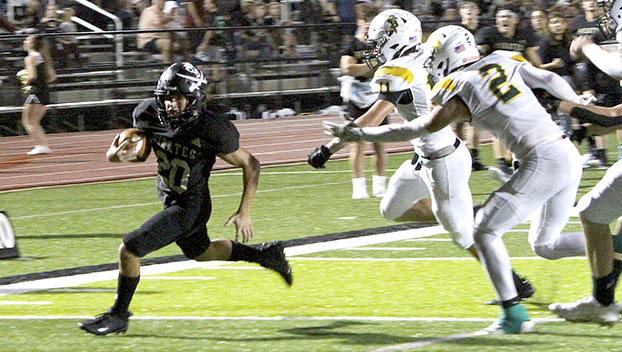 VIDOR – Looking for their first victory of the season, the Vidor Pirates are gearing up for a little road trip Thursday to face the Brazosport Exporters.

After two tough home losses to Silsbee and Santa Fe, the Pirates (0-2) look to tame a solid team in Brazosport (1-1).

The Pirates are coming off a 34-22 loss to Santa Fe. The Pirates had five turnovers and were down 21-0 before the offense even got on the field.

“We continuously shot ourselves in the foot but we kept ourselves in the game,” said Vidor coach Jeff Mathews. “They (Santa Fe) scored on their first series and then we mishandled two kickoffs in a row, and all of a sudden we were down 21-0.”

The Pirates staged a rally, moving the ball well and cut the Santa Fe lead down to 21-14.

“We were about to possibly tie it up and then we fumbled inside their 5,” said Mathews. “Not taking anything away from Santa Fe, they made the right plays and didn’t make any mistakes. That was the difference.”

Mathews liked the Pirates’ effort against the Indians, compared to their first week loss to Silsbee.

“The kids showed a lot of character against Santa Fe and they really worked hard during our Labor Day practice and Tuesday morning, too,” said Mathews. “You can just see it in them, that they want to improve. It’s things like turnovers and penalties that are haunting us. That’s something you can fix. We’ve got three more non-district games left, and that’s where we have to fix them. It’s a 10-game race and the most important races are those last five. We want to get better heading into our district opener.”

Brazosport dropped its season opener to Sealy 39-20 but rebounded last week with a 33-15 victory against Columbia.

The Exporters are led by senior quarterback Randon Fontenette, who has rushed for 208 yards and three touchdowns on 33 carries and has passed for 136 yards and a score.

Mathews is impressed with what Brazosport brings to the table.

“They have some athletes and they remind me a lot of West Orange-Stark,” said Mathews. “Their quarterback Fontenette is being heavily recruited and can flat-out run it and throw it. They have a good back in the Xavier Butler kid. They really ran the ball well against Columbia last week. They’ll be a challenge and we’ve got to keep those guys in front of us.”

The Exporters defense allowed 483 total yards in their loss to Sealy.

“I think we can be able to move the football,” said Mathews. “We did it well last week, we just can’t put the ball on the ground and give (Brazosport) more touches than what we get.”

Mathews feels the Pirates will be ready, despite having a short week.

“Practices have been really good and you gotta like that with it being a short week,” said Mathews. “The kids are really focused and they want to go out and there and win and put together a full game. The effort and character is there, we just have to do it on the field.”