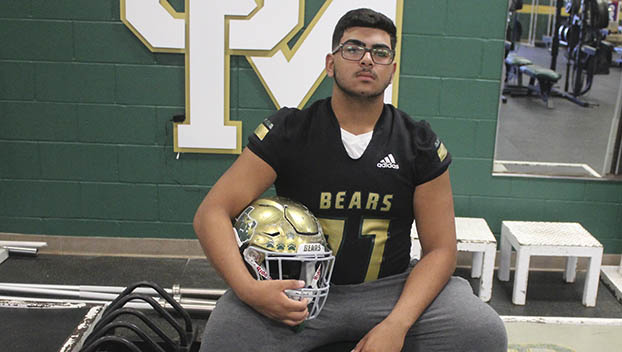 LITTLE CYPRESS – Every good offense needs a left tackle who can protect the quarterback’s blind side.

Well, the Little Cypress-Mauriceville Battlin’ Bears have that and then some in senior left tackle Jan Nazario.

Nazario has been a key sparkplug for the Bears offensive front the last two seasons.

“Left tackle is challenging, but I love it,” said Nazario. “When you have a right-handed quarterback like we have in Dean Reynolds, the left side is the blind side and I know it is up to me to protect him and not let anyone get the edge. It’s a hefty responsibility, but there is no other option. I have to protect my guy.”

Nazario has done an excellent job in his spot, started to excel as a junior and ended up making All-District.

Head coach Eric Peevey said when the new staff came in that first summer, Nazario was one of the first players to buy in on what they were doing.

“He never misses a workout,” said Peevey. “Even as a junior he was showing leadership skills. He really does a great job up front and has been a huge plus helping out our younger guys up front.”

Nazario want the Bears to be the best they can possibly be and will do what ever it takes to lift the guys up.

“I’m a senior this year and I definitely want to win, but I also want to help the younger lineman get where they need to be,” he said. “I try to help each one of them out individually. I want them to all be better than me by the time they become seniors.”

When he gets in his line grouping at practice, Nazario takes charge of it and the players listen.

“He has such a great mentality and he leads in such a natural way where the other kids can understand him,” said Peevey. “He’s just a kid that loves to play football. He’s a great young man from a great family.”

Nazario gets to protect Reynolds while he is in the pocket and gets to block for one of the best running backs in Southeast Texas in Da’Marion Morris.

According to Nazario, any hole opened allows Morris to find a crease because of his great vision.

“As long as we are doing our job, Da’Marion is going to have a chance to break one,” he said. “He really makes us look good at times, and I think we do the same for him, too.”

Nazario likes to pass block and run block and doesn’t have a favorite.

“The main thing for me is to help protect Dean when he drops back to pass,” said Nazario. “Dean is a really mobile quarterback and you have to stay on your toes because he’s capable of taking off for some nice runs. You have to be prepared to block on those.

“When you are run blocking, you get to impose your will while battling the guy in front of you. There is nothing like teaming up with the left guard and at the end of the play and you’ve blocked a couple of guys on the ground.”

Nazario, who moved to the United States from Puerto Rico when he was 2, loves football. When a game ends on a Friday night, he can hardly wait for the next Friday.

“Just being with my friends and seeing all of our fans cheering for us and packing stadiums, that is what it is all about,” he said.

Nazario likes what he sees in the Bears down the road.

“Last year was a great year and we’re capable of doing really big things this year,” said Nazario. “We just have to maintain our focus and stay sharp and we’ll be really good. We want to be really clicking when district starts.”

Nazario, who likes to look at cars and work on them some in his spare time, would like to play the game after he graduates high school.

“If I can, I definitely want to play some more ball,” said Nazario. “If the opportunity comes, I’m going to take it because I love it so much. If not, I would like to go to welding school, that’s also a passion for me.”