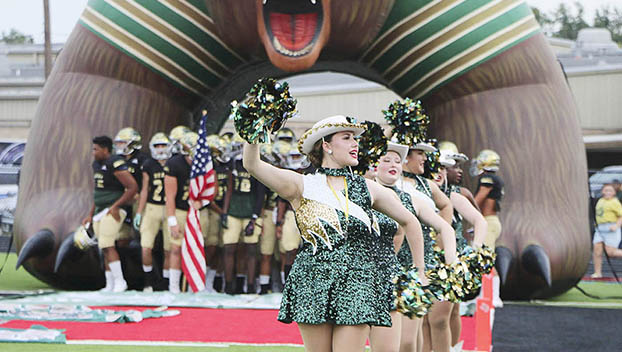 The Little Cypress-Mauriceville Honey Bear Drill Team gets the Battlin’ Bears fan base up on their feet before the football team ran out of the tunnel in their Thursday game against West Orange-Stark, which took place in Bridge City. (Van Wade/The Leader)

The first week of the high school football season was awesome, but the second week is going to be hard to match down the road.

On Thursday it was the West Orange-Stark Mustangs and Little Cypress-Mauriceville Battlin’ Bears going toe-to-toe the entire 48 minutes in the Orange Bowl.

Both teams went all out, and there were so many momentum changes that fans had their heads on a swivel.

It all boiled down to one big turnover and special teams play that led to a 38-32 Mustang victory.

Both teams finished with five touchdowns apiece, the difference was what the Mustangs did right after they scored.

WO-S converted four of their five two-point conversion attempts while LC-M missed or had tipped, three of their five extra-point kicks.

The atmosphere and spirit from both fan bases showed throughout the battle was top-notch. By the time the second quarter got started I didn’t see one empty seat in what was perhaps the largest crowd I’ve ever seen attend a game at Bridge City High School.

By the time the fourth quarter started, more than half the fans in the stadium were on their feet, rooting and chanting for their favorite team.

The enthusiasm was through the roof, and it reminded me that things are back to normal this year after going through the rough COVID situation fans and players had to deal with the past couple years.

The bands, drill teams and cheer squads rocked the house all night. Rumor has it that you could hear the crowds cheering all the way at City Hall in Bridge City clear on the other side of town.

And yes, both football teams put it all on the line. There is a ton of talent on both teams, and the rest of the season looks promising for the Bears and Mustangs.

Thanks to both schools for putting on a great show, and thanks to Bridge City ISD for letting the game take place on their campus. It will go down as the best Orange Bowl I’ve witnessed.

On Friday night, it was the Cardinals’ turn.

It was a tale of two halves for sure.

The Cardinals erupted for 23 second-quarter points to snare a nice 23-6 advantage going into the half.

The pesky Buna Cougars would not go away though, unleashing a red-hot passing attack in the second half to get to within 23-20. The Cardinals came up with one last crucial stop, halting the Cougars inside the BC 20, just a yard short from a first down.

It was a nice night for the Bridge City community as they watched their Cardinals play their first official varsity game on their new turf.

The atmosphere was electric from the start, with the home side packed full of red shirts and amazing cheers. And, of course, it always helps when the home team gets that “W.”

I think I will just plop my old derrière right back at Ward Stadium this Friday when the Cardinals host the Bears. Here’s hoping it will be just as exciting as the two games that were held there last week.