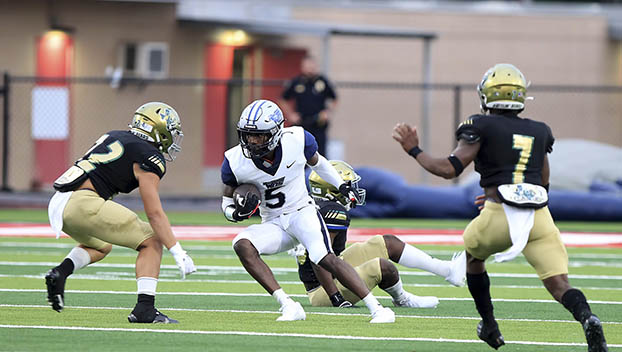 That will be the case for the second week in a row when they welcome the Port Neches-Groves Indians to Hooks Stadium in a non-district affair Friday.

The Mustangs (2-0) are coming off a 38-32 victory over the Little Cypress-Mauriceville Bears in a game full of dramatics while the Indians (1-1) nabbed their first win of the season, downing Beaumont United 49-0.

“There is no rest around here. The kids were up here getting after it on Labor Day,” said Mustangs coach Hiawatha Hickman. “We’ve got another big one this week. PN-G is going to come in here bringing all they got.”

The Indians got blistered by Port Arthur Memorial 50-15 in their opener but bounced back in a big way against the Timberwolves.

Hickman was impressed with what he has seen of the Indians on film.

“They looked so much better against United last week and looked like the PN-G of old,” said Hickman. “Their game with Memorial, things kind of snowballed on them. They had five turnovers, which really set them back and they got behind early.”

Like Hickman at WO-S, PN-G has a new first-year head coach in Jeff Joseph.

“Coach Joseph is a great guy and he’s trying to build things right over there,” said Hickman. “It takes awhile for kids to get used to a new system. We’re still doing it here, but I feel our kids are adjusting well.”

Hickman is definitely impressed with the Indians and their size.

“They are just humongous up front on both sides of the ball,” explained Hickman. “They like to spread you out and run the ball, as well as put it up in the air. They like to run about 60 percent of the time, though, behind that big front.”

Indians quarterback Cole Crippen passed for 197 yards, and running back Tommy Reed had 138 yards on 21 carries.

“The Crippen kid is a good one,” said Hickman. “He can move around and has a good arm. He gained valuable experience last year and he really sets the tone for them. They have solid backs and good receivers. We’re going to have to utilize our speed to get some pressure on those guys.”

Hickman likes what the Indians bring on defense.

“They’re big and nasty up front and their linebackers are excellent,” said Hickman. “We’re going to have to try to move those big guys up front. Hopefully we can attack the edges with our speed and try to open our running game up.”

Hickman and his first-year coaching staff were thrilled with the nail-biting win last week over LC-M in what was a thrilling Orange Bowl.

“That was a great game played by two excellent football teams,” said Hickman. “We were down 20-8, but the kids responded in the second quarter with 24 straight points. We went into the half with the momentum, but give LC-M credit. They came out and hit us in the mouth in the second half. We made some big plays down the stretch when it counted. We got into the Wildcat offense on that last drive and were able to run downhill because we thought the Bears were getting a little tired.”

Hickman felt the Mustangs gained a lot from the encounter with the Bears.

“We moved the ball at well at times and made big plays when we had too,” said Hickman. “The Bears, they are so big and talented up front on defense and they were a challenge, but I thought our offensive line came up huge late for us and that was a big difference. It was a great game and it had the fans on the edge of their seats all night. LC-M is going to be trouble down the road. They are going to be tough in their district and will probably win it, so this is definitely a quality win for the Mustangs.”

The Mustangs and Bears played in front of a packed house in Bridge City last week and Hickman expects the same type of atmosphere come this Friday.

“We’re telling our kids this week to get ready to see a sea of purple on the other side Friday night, because you know those PN-G folks are going to bring it,” said Hickman. “It’s just another big non-district game for the Mustangs. It’s games like this that makes you mentally tougher as you get ready for the upcoming district schedule.”