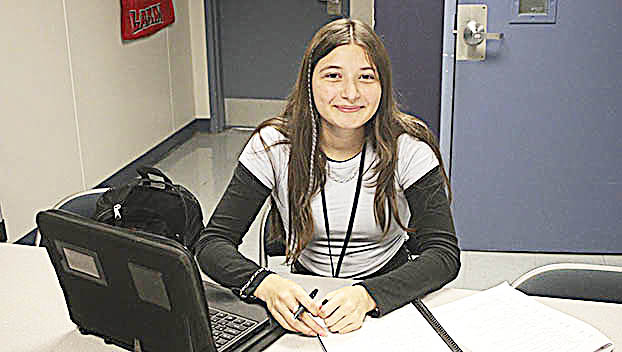 West Orange-Stark senior Alicia Odom looks to be a major influence on the WO-S campus this year and will be busy in so many facets whether it is in academics, social clubs or theater. (Van Wade/Orange Leader)

WEST ORANGE — Whether it is wowing a theater crowd, being a part of the National Honor Society, president of the student council or a stout academic competitor in UIL contests, West Orange-Stark senior Alicia Odom loves being a part of campus life.

“The first couple weeks have went by really slowly, but I know by the time we come back after the Christmas holidays, it’s going to fly by,” said Odom. “As a senior, you start thinking about your independence some, and yet you want to collect as many wonderful memories as you can that you will remember for always.”

Odom, the daughter of Maritzza Odom and Timmy Odom Jr., is completing courses at Lamar State College Orange and earn get her associates degree and walk across the LSCO stage two weeks before she actually walks across to get her WO-S diploma.

“That’s crazy when you think about it, but it is going to be an awesome feeling,” said Odom. “It can be a struggle at times, because I try and juggle so many things but I know I can push through. I just love to learn.”

Student counselor Jennifer Sims says Odom is diligent as she juggles so many things well and thrives off of it.

“She goes at everything she does 100 percent and is just a bundle of energy,” Sims said. “She’s the type, that when she sets goals, she’s going to reach them.” 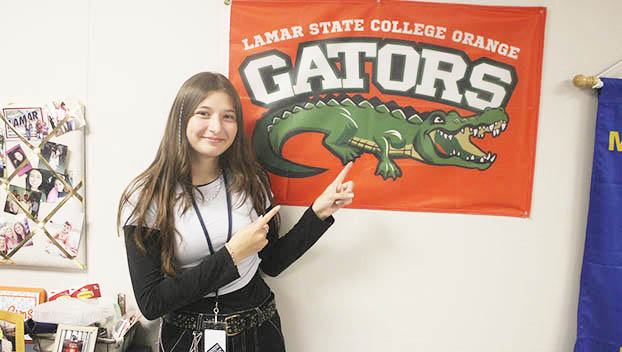 West Orange-Stark senior Alicia Odom will get an Associates Degree at Lamar State College Orange even before she gets her high school diploma from WO-S. (Van Wade/Orange Leader)

Odom is adamant about learning and growing. Reading is one of her passions.

She finished first and third in the Stark Foundation Interpretive Reading Contests in recent years. She has also excelled at the UIL level in math, science and prose and poetry contests.

The National Hispanic and Small Town Rural Recognition College Board have honored her after shining in the PSAT and SAT tests.

Odom was part of the WO-S Rotary Youth Leadership Team that went to a great camp over the summer.

“That was the most amazing camp ever,” expressed Odom. “The experience we gained was priceless. We were able to explore leadership and team building and getting ideas from kids from other schools.”

Odom stays busy as student council president as she and the council look to fire up the Mustangs fan base.

“What we’ve wanted to do is create more ‘Mustang Madness,’” she said. “We have seen what other schools do and their crowds at sporting events. Sure, we always have big football crowds, but we want to create an overall great feeling where the student body goes out and supports the tennis teams, the softball and basketball teams, the band and go see what the theater kids are producing.”

Odom says the student council is also helping out at Winter in the Park in West Orange, which brings the community together. Members will also work at the Orange Trash-off that helps keep Orange clean.

Of course, Odom’s biggest passion is her work in theater and being involved in UIL One-Act Plays.

She is going into her fourth year of theater.

“I had the love for it at an early age, watching shows with my mom,” Odom said. “She loved musicals, and I was enthralled with them. I love dramas, too.”

Odom said theater director Mason Franco is “awesome” and provides positive vibes in what they try to accomplish.”

Odom rarely has a lot of down time but likes to stay busy even then.

“I constantly like to learn and right now I’m learning how to crochet, my aunt has been teaching me,” said Odom. “I like to paint from time to time. I do like to play the piano and guitar, even though I’m not very good at either. My favorite has to be reading, I love books and like to read dramas.”

Sims said Odom’s smile can light up a room.

“She’s so respectful of others,” said Sims. “The energy she brings is infectious and that trickles down and everyone just loves her for it. She’s just an amazing kids that will continue to go on and do wonderful things.”

When Odom graduates from LSCO and WO-S, she plans on attending the University of Texas.

She is up in the air as far as a major. It could be engineering or biology. It could even be theater.

“I think it is going to be a great year, and we’re off to a great start,” said Odom. “I want to be able to help the younger kids as much as possible and tell them they can reach for their dreams.”