Turnovers prove to be the difference in Vidor-Santa Fe game 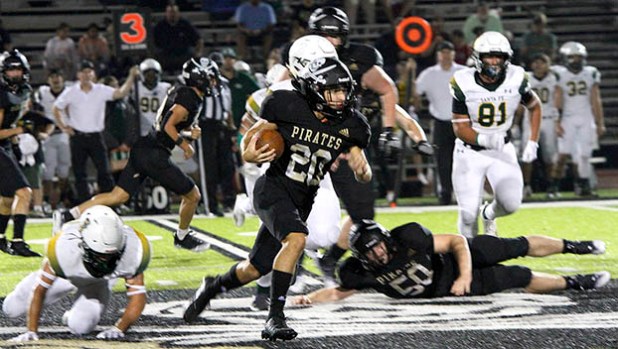 Vidor running back Daigen Venable (20) breaks out for a big run in the second-half of Friday's game.(Tommy Mann, Jr./Orange Leader) 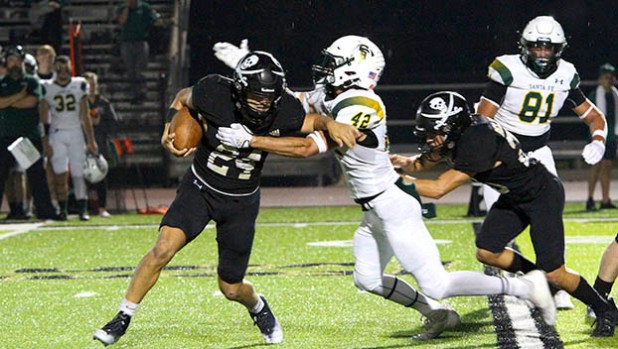 VIDOR – A slow start was too much to overcome for the Vidor Pirates Friday night in their battle with the Santa Fe Indians.

The Indians cashed in on some big plays in the first half and ended up holding off the Pirates 34-22 at Pirate Stadium.

The Indians (2-0) took an early lead and never look back in their Week Two victory.

“We made too many mistakes tonight, and need to fix that heading forward to improve as a team,” said Matthews after the game. “The kids had a much better effort tonight compared to our first game. They kept battling and we liked that but give Santa Fe credit, they made almost all of the big plays. We’re just going to go back to work and keep on improving, there is still a long season ahead.”

The Pirates (0-2) fumbled the ball away four times, including two kickoff returns that the Indians were able to jump on, with six total dropped balls hitting the turf during the game for the Pirates.

Thanks to the turnovers from the Pirates, the Indians were able to take advantage of great field position and push the ball down field.

The main playmaker for the Indians was wide receiver Kyeler Thompson, an all-around athlete that the offense utilized in the passing game all night long. Thompson had 113 yards receiving and three touchdowns, including his longest at 44 yards. The Indian run game was solid on the night, but Thompson was able to break the game open and really put the Indians in a great position to win the game.

Jason Watson was the workhorse for the Pirate offense. Watson rushed 17 times for 141 yards, including two rushes for 37 yards each for the teams’ biggest plays of the game.

The Pirate offense uses a lot of misdirection and quick movement to keep the defense on its heels, and Watson was able to take advantage of that time and time again, but it just wasn’t enough to top the Indians in this one.

The Indians got on the board first with a quick three-minute drive to open the game to take an early lead.

Indian quarterback Kase Albrecht opened things up with two passes, the first going to Blake Elkins for 18 yards. The second would go to Thompson for eight yards, setting up Joseph Floyd, who had 99 yards on 22 carries, to punch it in from two yards out. The extra-point went through and the Indians led 7-0.

Santa Fe took advantage of a botched kickoff return and recovered a fumble in Vidor territory.

One play was all it took, Albrecht connected with Thompson for a big 44-yard touchdown to make it 14-0 with 8:46 left in the first quarter.

Points kept getting piled on early by the Indians with another recovery on the kickoff. Floyd got the drive started with a few solid runs back to back, and Albrecht let it loose with the passing game. The Indians capped the drive off with a Albrecht pass to Thompson for 17 yards and a touchdown, pushing the lead to 21-0 with four minutes still in the first quarter.

The Pirates got on the board with just 10 seconds left in the first half. They were given great field position with a weak punt from the Indians. Jason Watson broke it open with a 37-yard run up the middle, bringing the Pirates within striking distance of the end zone. Daigan Venable would took an option pitch in from eight yards out for the touchdown. The Indians blocked the extra-point, making the score 21-6 as the first half ended.

Vidor clawed back with another touchdown drive as the third quarter wound down. Watson got the drive going with a few hard runs up the middle to rack up a couple of first downs. Venable got in on the fun with a few big runs of his own as the Pirates worked the ball down the field. Ricky Gall, who had 60 yards on 11 carries, finished the drive off with an eight-yard pitch to the outside. Venable dashed in for a two-point conversion to trim it to 21-14.

The Indians forced a fumble on defense and scooped and scored to extend their lead to two scores. A handoff went south as the Pirates lost the grip and Indian Stephen Garcia scoop up the fumble after a scrum for it had it bouncing on the turf. Garcia ran it in from 50 yards out for the score. The extra-point failed, making it 27-14 Indians with seven and a half minutes left in the game.

Santa Fe got another touchdown, thanks to another Pirates fumble lost. Floyd carried the next drive with three carries for over 40 yards rushing. Austin Moffett punched it in from a yard out for the touchdown, giving the Indians a 34-14 edge with 4:30 left.

The Pirates weren’t done yet, as Jarrett Odom made a big play to keep the drive alive and score. After a couple of runs from Venable, Odom was forced to run out of the pocket but got loose for a big 22-yard scamper, to set up a scoring chance. Odom came back with another big play, finding Venable on a 15-yard touchdown toss.

The Pirates will hit the road for the first time next week when they travel to face Brazosport.