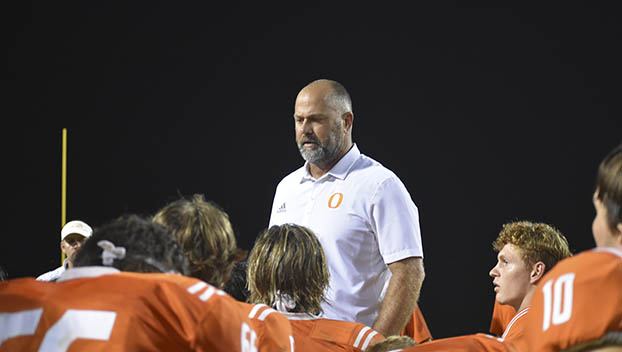 ORANGEFIELD – It was a score fest in Orangefield Friday night.

In a game that saw a lot of big plays, the Spring Legacy Titans toppled the Orangefield Bobcats 40-30 at F.L.McClain Stadium.

It was a game full of lead changes and big plays, and the Bobcats put up a solid fight.

“We faced a really good football team,” Orangefield head coach Josh Smalley said following the loss. “Legacy is really fast, has a lot of great athletes and they’re really big up front. I felt like we competed ‘til the very end and that’s the thing I’m really worried about in non-district games.”

The Titans jumped out to an early lead on their opening drive when quarterback Jacob Smith connected with receiver Stefan Reynolds, who took the pass 51 yards to the house. Following the PAT, Legacy held a 7-0 lead after just three minutes of game action.

The Bobcats fired back on their next drive. A 53-yard scamper by Case Singleton set Orangefield up at their opponents’ three-yard line, and fullback Cameron Dischler punched it in for a rushing score.

On the Titans’ next series, Orangefield’s Kyle Michael made a diving catch to intercept a tipped pass. The ‘Cats scored just four plays later, pulling ahead 14-7 after a 14-yard touchdown rush by Gavin Perry-Koci.

Heading into the second quarter, the Titans pushed the ball downfield on a 15-play drive. However, they were forced to settle for a field goal which the kicker shanked wide left. They made up for it with five minutes remaining in the half when Roric Hawkins broke a run down the middle for a 73-yard score, tying the game 14-14.

While Legacy caught their opposition off guard and recovered their own squib kick, the Orangefield defense held strong and forced a turnover on downs. The Bobcats regained the lead with a big rush of their own — Dischler broke loose down the left sideline for a 48-yard touchdown, giving his team a one-score lead heading into halftime.

The Titans made a statement on their first chance following the intermission, tying things up 21-21 with a 30-yard touchdown pass. Orangefield immediately responded with another huge run for a score, this time a 65-yarder from Dischler.

The Orangefield defense came up with another crucial stop when Kane Smith broke up a would-be Legacy touchdown in the end zone. As the third quarter wound down, the Titans scored on a three-play drive to once again pull even, 28-28.

The Bobcats’ offense struggled to find their footing in the second half, and their woes continued entering the fourth quarter. They failed to score an offensive touchdown in the game’s final frame, allowing the Titans to finally reclaim the advantage.

Legacy (1-1) finally pulled back ahead at the 11-minute mark as Smith scrambled for a 24-yard score. The Bobcats blocked the PAT, which Dischler scooped up and returned almost 80 yards for two points. Nevertheless, the Titans found the end zone again with six minutes to go, making it a two-possession game, 40-30. The Bobcats were unable to mount a comeback, falling to 1-1 on the year thus far.

“We had a great game plan, we just didn’t execute,” Smalley said. “We’ve got to tackle better, we’ve got to cover better, and we’ve got to block up front.”

Orangefield will play their next game at home versus Shepherd, Sep. 9, at 7:30 p.m.