Bridge City Cardinals and Buna Cougars go down to the wire 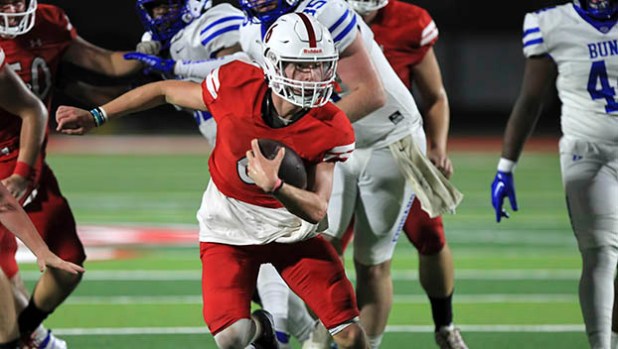 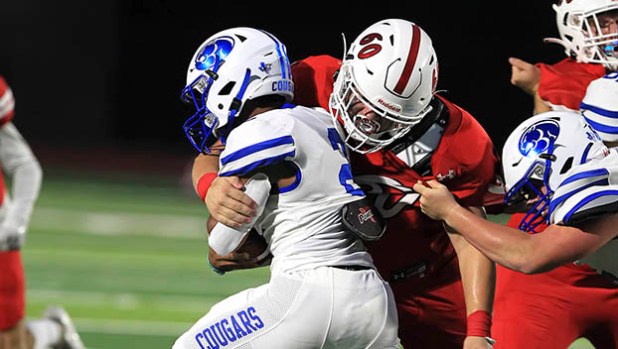 BRIDGE CITY – It was quite the battle between the Bridge City Cardinals and Buna Cougars Friday night at Larry Ward Stadium.

In a tale of two halves, it was the Cardinals that had just enough left to hold on for a 23-20 victory.

Buna actually outgained the Cardinals 366-307 on the night with 255 of their yards coming in the second half. However, the Cardinal defense rose up to make key stops down the stretch to nab their first win of the season.

Bridge City scored all 23 of its points in the second quarter and looked to be in command before Buna opened up a big passing attack after intermission.

“It’s a win and we’ll take it, but we were fortunate some because of all the mistakes we made,” said Cardinal head coach Cody McGuire. “We’re still a young football team but we made some miscues that we shouldn’t make after two scrimmages and a game. We made some key stops late to keep Buna out of the end zone but we should have put the game away a little earlier. We’ve got to learn how to finish.”

Buna quarterback Toby Marse completed 17-of-30 passes for 278 yards and had 187 yards in the air in the second half. Cougar running back Jacob Johnson rushed for 91 yards on 24 carries. Kayden Dill had five catches for 81 yards Landon Stephens had four grabs for 67 yards.

The Cardinals erupted for 23 second-quarter points to send the Cougars reeling into the locker room.

The Cardinals piled up 228 total yards in the first half and limited Buna to 111.

“We moved the ball well in the first quarter but couldn’t cash in,” said McGuire. “The second quarter, the kids played great. We moved the ball on three good drives and punched it in and the defense was clicking too. We didn’t have that same fire when we came out in the second half and the kids realize that now, they know they have top play four full quarters. When we can do that, we can be pretty good.”

After stalling deep in Buna territory on their first two drives, the Cardinals were able to cash in on their third series.

The Cardinals motored 57 yards in seven plays to get on the scoreboard early in the second quarter.

Bearden connected with receiver Noah Broussard on a 14-yard strike to the Cougar 40.

Bearden followed with a nice keeper on the next play, going 20 yards to the Buna 20. Facing third-and-3 from the 13, Bearden handed off to brother JS Bearden, who bulldozed his way straight up the gut for a 13-yard touchdown. Victor Hernandez drilled the extra-point, giving the Cardinals a 7-0 lead with 8:10 left in the half.

After holding the Cougars to a quick three-and-out, the Cardinals kept churning on their next series, finding the end zone again after a seven-play, 48-yard scoring drive.

Bearden completed two passes for 22 yards to receiver Gavin Bodin. Bearden broke off a 14-yard run on a keeper and followed with another eight-yard gain to the Cougar 3 and JS Bearden capped it off with his second touchdown of the night, going off tackle from three yards out, pushing the lead to 14-0 with 4:19 in the half.

Buna answered nicely with a five-play, 61-yard scoring drive of their own. Marse had a 15-yard screen pass to Johnson on third-and-6, which moved the ball to the Cardinal 42. Two plays later Marse found a streaking receiver in Gavin Theriot down the left sideline and hit him in stride for a 27-yard touchdown toss.

However, Bridge City standout linebacker Mason Pruitt blocked the extra-point attempt and zipped all the way to the other end zone to score two points, putting the Cardinals up 16-6 with 2:11 in the half.

The Cardinals kept the Cougars reeling as they got the ball and scored quickly in three plays. Bearden hit Bodin over the middle and the lanky receiver got loose down the right sideline for a 48-yard gain to the Cougar 15. JS Bearden carried for nine yards to the 6 and Hutch Bearden capped it with a six-yard dart touchdown dart right up the middle, making it 23-6 with 1:21 in the half.

Hutch Bearden completed 6-of-9 passes for 108 yards and rushed for 67 yards on 12 carries. Bodin was huge with pass-catching skills, hauling in five grabs for 94 yards. JS Bearden had six rushes for 36 yards.

Marse completed 7-of-10 passes for 91 yards for the Cougars but the Cardinals stifled the Buna run game in the half, limiting the Cougars to just 20 yards on 16 carries.

Buna’s Jaxson Sylvester picked off a Bearden pass at the BC 41 and returned it to the 34 with 10:45 in the third. Marse connected with tight end Stephens on a 32-yard pass to the 7.

Buna had to move back to the 16 after a holding penalty but Marse found Stephens for a 15-yard gain and Jacob Johnson capped it with a one-yard touchdown run. The two-point conversion pass failed but the Cougars pulled to within 23-12 with 9:50 in the third.

The Cardinals moved from their own 38 deep into Cougar territory but Buna forced a fumble by JS Bearden at the Cougar 15 with 11:35 remaining.

The Cougars promptly marched 85 yards in 14 plays as Marse made some great throws getting his team down the field. He had a big 20-yard pass to Isaiah Robinson that got to the BC 27. He later found Kayden Dill on a 12-yard touchdown pass on third-and-11. Johnson ran in the two-point conversion, trimming the Cardinal lead to 23-20 with 8:48 remaining.

On their last offensive play of the game, Marse found Gill on a 23-yard pass to the Cardinal 21, but unfortunately for the Cougars they needed one more yard to keep the drive going on the fourth-and-24 play. Bridge City then ran out the clock with the Cougars having no timeouts left.

The Cardinals will remain at home next week when they welcome in the Little Cypress-Mauriceville Battlin’ Bears.