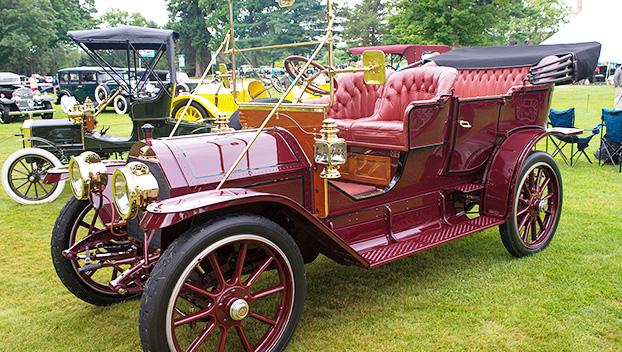 Automobile registration in Orange County began Feb. 9, 1909. Handwritten registrations were recently found in a dusty, musty record book that had been in storage for decades.

Orange was home to men who had made fortunes in the timber and lumber business. At one time Orange had seven sawmills and 17 shingle mills. As motor cars appeared on the scene, it was natural that they would become familiar sights on the roads and streets in Orange.

On the first day, the first two cars registered were Cadillacs. One belonged to Lutcher and Edgar Brown, the second to George W. Bancroft.

There were five other cars registered on Feb. 9. There was a Buick, belonging to Miss Fannie Buck, a Pope-Toledo by W.H. Stark, F.H. Farwell registered an Autocar, M.V. Anderson & Co. owned a Maxwell and E.L. Reid drove an Oldsmobile.

Known as the “Silent Mile a Minute Car,” the Pope-Toledo was built as a luxury car between 1903 and 1909. It was the successor to the Toledo Steamer. The engines were four cylinder gasoline powered.

The 20 horsepower model sold for $3,500, and a 60 horsepower was available for $7,500. The last cars made were compromised at 50 horsepower and sold for $4,250. John Willis bought the Toledo Overland Company in 1909, and production of the Pope-Toledo ceased.

The Pierce-Arrow was produced from 1901 until 1938, when luxury cars became victims of the depression. George N. Pierce started building cars in Buffalo, New York. Automobile manufacturing was a drastic change from his original endeavor, which was building bird and squirrel cages.

In 1905 Pierce began utilizing cast aluminum body panels. The cars had 147 inch wheel bases with tires four feet high. The Pierce-Arrows were said to be without equal. In 10 years the company built 1,638 cars which sold for between $4,000 and $8,000.

When J.W. Link bought his Pierce-Arrow in 1908, a “factory man” came to Orange to show him how to operate the car. The only drawback was the tires had to be changed “often.” Link never learned to drive and always hired a chauffeur.

The last Pierce-Arrow registered in Orange belonged to E.W. Brown Jr. in 1916.

In 1916, H.T. Mansfield registered the only Partin-Palmer ever seen in Orange.

C.W. Roebuck and W.M. Gunstream were registered owners of Paige cars. The Paige was advertised as “The Most Beautiful Car in America.”

Other cars registered in those early years were Packard, Rambler, Hudson, Dodge, Overland and Chevrolet.

Not surprisingly by 1916 the most popular car registered had become the Ford, with a total of 134 on the books. The Ford was followed by 35 Hupmobiles, 19 Studebakers, 16 Cadillacs and 14 Maxwells.

The original Hupmobiles sold for $750. The “Hup” stayed in production until 1940.

Ellison Cruse registered the first truck, which was listed as a “Delivery Van.” By 1916 there were 12 trucks in the registration book.

In the years between 1909 and 1916, there were 40 motorcycles registered. They included the Excelsior, Mercer-American, Indian, DeLuxe, Carly-Davis, King and Harley-Davidson.

Jones Turner registered the first motorcycle in 1909 and his last one in 1916. The second motorcycle was a Merkel.

And Now You Know….