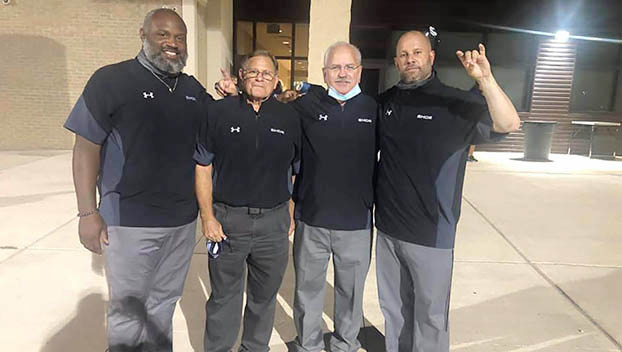 Another West Orange-Stark football great will be honored by a university that he had a great career at.

Roy Locks was a fierce competitor in his days with the Mustangs, nabbing All-State honors at linebacker for a superb 1997 Mustangs team.

Locks, who was the Orange Leader Male Athlete of the Year for 1998, went on and had a tremendous run for Northwestern State University, where he earned major accolades.

For all of his accomplishments as a Demons student-athlete, he will be inducted into the Northwestern State N-Club Hall of Fame Class of 2022.

Locks is part of a 12-member group that will be inducted and honored Oct. 22 at 9 a.m. ahead of the Demons’ Homecoming game against Southeast Missouri.

“It’s such an honor, and I’m just realizing now how much it is sinking in,” said Locks. “It feels really special. At first, I saw so many social media posts and people texting me and congratulating me. People that know me know that I’ve never been a rah-rah type of guy. I want to thank everyone that sent me the messages, it has been wonderful.”

Locks was always proud of getting the opportunity to play college football.

“I’ve been fortunate enough to have great people in my life, from my own family, my Mustangs Family and all of my friends and teammates at Northwestern State and of course, all of the great coaches I had along the way,” said Locks. “Everyone pushed me to be the best I could be, on and off the field. I was able to take advantage of getting a tremendous education. I will always feel blessed to have had all of that support.”

Locks had a huge 2002 season for the Demons.

He recorded 70 tackles, including 10 sacks and 16.5 more for losses for a defensive unit that ranked in the top 10 in the nation.

Locks started all 47 games at defensive end for the Demons, finishing with 224 career tackles, including 37.5 for losses.

He was a key component for helping the Demons make back-to-back FCS playoff appearances in 2001 and 2002.

“We had a good run for sure,” said Locks. “During that stretch, we had a great defense and teams that really strived hard to reach their goals. We were able to put Northwestern State on the map and helped the Demons become relevant. I was fortunate to have so many awesome teammates in Natchitoches. They really made me look good at times. It certainly wasn’t all me. I will forever be grateful to all of those guys.”

Locks was already a member of the Top 100 Demon Players of All-Time.

People might forget how much of a beast Locks was in the throwing events in the shot and discus for the Mustangs while in high school.

He went on to become a member of the 2001 and 2002 Southland Conference Indoor Track and Field championship teams as a shot putter.

“I was pretty good in the shot put in high school but we had some beasts that were throwing back in those Southland Conference days,” laughed Locks. “I did work hard at it, and if I was able to score some points, getting four points here and two points there, that was great. Just knowing that you contributed to something special was always a great feeling.”

Locks is serving as defensive coordinator at Killeen Shoemaker. Former Mustangs standout and assistant coach Toby Foreman is the head coach. The Wolves got off to a nice start to the season, defeating San Angelo Central 31-24 last week.

“I love what I do, plain and simple. I love helping kids,” said Locks. “Being a coach, you can go a long way in helping kids change their lives and be such a positive influence. I was fortunate enough to have had so many great coaches along my journey and have worked with a bunch, too. I may have been known as a player for a long time, but being called ‘Coach’ is probably the best honor of all.”