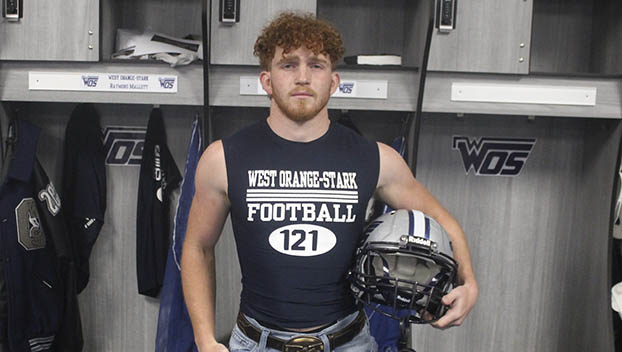 WO-S running back and linebacker Dustin Helm brings a lot to the Mustangs, both physically and spiritually. (Van Wade/Orange Leader)

WEST ORANGE – A true gamer with a big heart.

Whether it is in a physical form or a spiritual one, West Orange-Stark junior running back and linebacker Dustin Helm is right there to get his Mustangs teammates pumped up.

After getting a few varsity snaps last year as a sophomore, it is tough to get Helm off the field this season.

In the Mustangs’ season opener, Helm was the leading WO-S rusher, carrying the ball 11 times for 107 yards in a 32-0 victory over Nederland.

“It was exciting to get out there and get after it out of the backfield,” said Helm. “You’ve got to give credit to our offensive line. They opened some big gaps, and it felt like we were running downhill the whole time.”

Helm is really enjoying the extended playing time this season. He’ll play a lot on offense but will also see some time on defense.

“It’s a whole new feeling this year,” said Helm. “I was kinda getting used to everybody last year. I realized quick that it is a whole different ballgame, going from the JV level to varsity. The opportunity last year, which I’m grateful for, really showed me how much more work I had to do. My goals in the offseason were to get bigger, stronger and faster.”

“Dustin has really made his presence felt around here and has built some great relationships,” said Hickman. “He’s really found his niche in the running game. He runs hard, he blocks hard. He’s just tough, tough, tough. We like to call him our ‘Swiss Army Knife,’ and we also love to call him ‘Red.’ He sets a good example of what we expect out of our kids.”

Helm stayed busy non-stop, has become much more chiseled and feels he is finding the holes and getting through them quicker after two scrimmages and the opener.

“We had an excellent offseason program before, but now it is even better,” said Helm. “Coach (Cory) Bell came in here and has really pushed us hard as the strength coach. He rides us hard, but he has a lot of love for us, too. He knows what he is doing for sure, with the great college background he has. It would be tough to find a team in better shape then we are.”

Helm is instrumental in making sure the Mustangs are prepared before each game as he gives the prayer in pre-game.

“God and my spirituality is something I really cherish and I have so much passion in my heart for people,” said Helm. “I love saying the prayer so I can really help uplift my teammates. We all go through things time to time and praying together and being there for one another, that’s what it is all about.”

Helm was one of the organizers of a group prayer on the WO-S sidelines with Nederland players last week after Nederland return man Isiah Hernandez, who was down on the field for awhile, suffered a concussion.

“That was a moment I will always remember. Sure, we played football that night, but it was also about being a human and showing compassion,” said Helm. “We may not have been on the same team, but we are all football brothers. Football is not bigger than life. To join hands and be as one, that was special. I’m just so grateful that Isiah is going to be OK.”

Hickman enjoys the leadership tendencies Helm shows, despite being a junior.

“Dustin has tremendous faith. It starts at home, and he has a great family,” said Hickman. “He’s the perfect kid to give the prayer for each game and he always has his Bible close by. He’s just an amazing young man in all facets.”

Helm likes the attitude the Mustangs bring forth as the season slowly moves forward.

“Coach Bell stresses you have to have four pillars – spiritual, mental, emotional and physical – if you don’t have all of them, things can fall down,” said Helm. “That is what we base so much on around here. We’re all here to be not only the best players we can be, but just as good as people off the field too.”

Helm has typical goals for a Mustangs student-athlete.

“The goal is always to win the district, make a run in the playoffs and try to get that State ring,” said Helm. “Coach Hickman likes to use the phrase ‘327 miles,’ that’s how many miles it is from here to Dallas for the State Championships. He also preaches that we have a lot of miles to go, too. It’s a day-by-day, week-by-week grind, and we can’t get ahead of ourselves. That’s when someone can get you.”