Kane Smith a game changer for the Orangefield defense 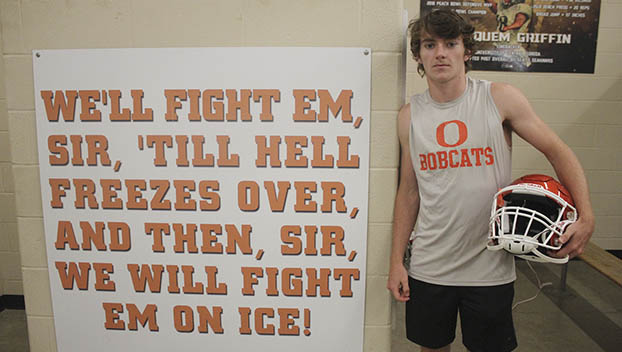 ORANGEFIELD — Before every football season begins, coaches are always looking for players that can be game changers.

They also look for leaders and players who contribute to the overall well-being of the team.

Smith, playing his first full season on varsity, made a huge impact in the Bobcats’ season-opening 28-9 victory over the Bridge City Cardinals.

Smith, who is also the Bobcats backup quarterback, was involved in eight tackles and had a monstrous 97-yard interception return for a touchdown to help give the Bobcats the upper hand.

“We had just fumbled to give them (Bridge City) the ball deep in our territory when we were up 7-0,” said Smith. “I was able to get a good read on a slant I thought they would be doing. I just remember being in the end zone and then meeting the ball. I didn’t realize how long the return was until it was over. All I remember is I had a bunch of my teammates leading the way with some nice blocks and I was able to go all the way with it. It felt awesome, and it gave us a little fuel, putting us up 14-0.”

It was Smith’s first time starting at the varsity level. He was called up for the Bobcats playoff game as a sophomore last season.

“Playing on Friday nights, it’s a whole different world from those Thursday night games,” said Smith. “The speed of the game is unreal, and those tackles sting a little more for sure. It is a learning experience. The more you play though, the better you get. That’s what I tell our offensive line all the time. They are the youngest part of our team, and each week they are getting better, getting that experience.”

“He’s one of those kids that does everything right,” said Smalley. “When he is asked to do something, you never have to tell him twice. He’s a junior, but he is one of our leaders. Everyone gets along with him and is great to be around. We knew he was going to play a bigger role for us this year and he’s been way more than what we expected. He’s just a good player and even greater kid.”

Smith said you can really get a good look at what offenses are doing from the safety position.

“You can read the quarterback and you can read their keys,” he said. “Of course, the most important thing is not letting the receiver get behind you. At safety, we are also important at coming up, stopping the run and helping out the linebackers.”

Smith feels the Bobcats defense will be tough to get through all season.

It includes a good mix of seniors who played last year back, along with juniors.

“Cameron Dischler and Jackson Humplik are really good in the secondary, and freshman Mason Manning is going to be really good,” Smith said. “Lane Gipson, Kyle Michael and Beau Elkins are tough at linebacker. We’ve got a good defensive line with seniors Morgan Sampson and Koen Maddox up there. We’re really playing well right now and I think we’re tough to move the ball on.”

Smith said the team worked hard all summer and each player pushed everybody along.

The result is everyone is in good shape and stronger than Smith has ever seen.

“The best thing about us, no one thinks they are superstars,” he said. “We have one team and one goal, and that’s to be the best we can be every week.”

He also plays basketball, baseball and runs track. He even finds time to be on the fishing team.

“Fishing is my passion,” said Smith. “I love football and I like the other sports, too. Fishing, hunting, that’s what I love to do to relax.”

Coach Smalley said it is rare when a school has a four-sport athlete.

“He never seems to wear down either; he loves doing what he enjoys to do,” Smalley said.

Smith believes the Bobcats can make a nice run in 2022.

“The goal is to win the district and win in the playoffs,” said Smith. “We feel like we have the team to do it. It’s just a matter of playing hard each week, not looking ahead and all of us sticking together. I’ve played with these guys a long time now and I like what we’re capable of.”