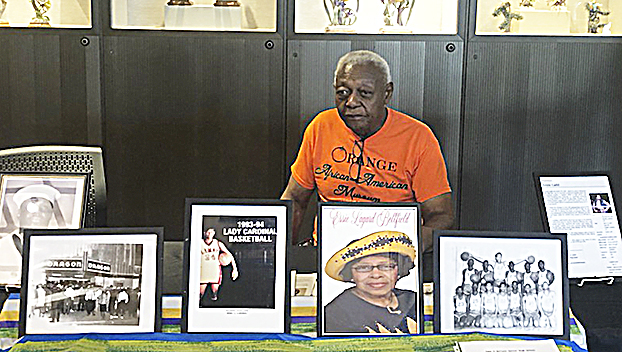 Henry Lowe, seen on Saturday, is the curator/owner of the Orange African American Museum. (Shari Hardin/Special to The Leader)

On Saturday from 10 a.m. to 2 p.m., the Orange African American Museum (OAAM) was one of the special activities available to visitors during the Stark Museum of Art Family Day.

Although not yet open to the public, the museum and its owner have been participating in community events for the past several years educating the public and fundraising to renovate their building and install exhibits.

The OAAM was the idea of curator/owner Henry Lowe. The impetus behind the opening of the museum was his epiphany regarding the need for a venue to recognize the accomplishments of African Americans of Orange.

“I just got to thinking about it more and more, and I said to myself, whenever I go home [from California], I should do a museum,” Lowe said. “If I dig into history as a whole, we need more black museums … so much is forgotten.”

Some of this “forgotten history” was the subject of the trivia sheet visitors to the family day completed. Visitors learned about notable African Americans of Orange, like Essie Bellfield, Andre Robertson, Matthew Gans and Velma Jeter.

Volunteering alongside Lowe was J. David Derosier, formerly of the Orange Train Depot Museum board.

“I’m involved in the communities where I live and have lived,” Derosier said. “He’s my friend and he needed help, so, I’m here.”

Derosier helped children with their trivia sheets and explained OAAM’s exhibits to visitors.

OAAM’s mission statement is to “obtain vital historic facts, documents, artifacts and history of African Americans in Orange, Texas and document their contributions to the United States of America.”

Exhibits to be featured at the museum span the historical timeline from enslavement, to emancipation, to reconstruction era and to modernity. In the museum’s collection now is a handwritten poem and autograph from Langston Hughes of the Harlem Renaissance.

The museum also has an autograph from Margaret Walker of the Chicago Renaissance. Both visited Orange April 12, 1945.

Lowe said what is needed for the OAAM to be operational.

“We’re looking for volunteers with skills to help us do drywall, electrical and everything else that goes with renovating a building,” Lowe said. “We also need some funding. We plan to enlarge our restroom to make it compatible for wheelchairs. And we’re going to have to get our ceiling put in its proper place, and an electrician will have to put the lighting in correctly.”

Lowe’s early 20th century birth makes him a contemporary of African American history. On Saturday, while speaking to visitors, he noted he was alive when Jackie Robinson broke into Major League Baseball. His goal with the opening of the OAAM is to share that history with the public.

The building that will house the Orange African American Museum is located at 408 West Park Avenue in Orange.

Prospective contributors and volunteers may contact the museum by email at info@OAAM.info or through their Facebook page.