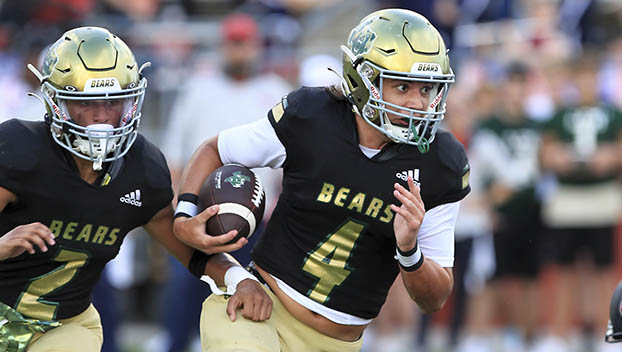 LITTLE CYPRESS – It took them two days to get it in, but the Little Cypress-Mauriceville Battlin’ Bears certainly looked impressive against the Hardin-Jefferson Hawks in their season opener.

The Bears crushed the Hawks in every phase of the game in a decisive 35-0 victory and will now turn their complete attention on facing the West Orange-Stark Mustangs Thursday night at Bridge City’s Larry Ward Stadium in the Orange Bowl.

How dominating were the Bears against H-J?

LC-M racked up 539 yards and limited the Hawks to 58 yards and just three first downs.

“We were really moving the ball on that first night in Beaumont but kept shooting ourselves in the foot with mistakes here and there,” said LC-M coach Eric Peevey. “We were able to put it all together in Port Arthur on Friday and we saw a lot of positive things.”

The Bears offense was piling up yardage at almost 10 yards a clip.Quarterback Dean Reynolds completed 14-of-22 passes for 232 yards and a touchdown and rushed for 48 more yards and two scores. Running back Da’Marion Morris shredded the Hawks defense for 172 yards and a TD on 18 carries and had three catches for 61 yards. Isiah Picard had five catches for 68 yards.

“We really moved the ball up and down the field well and had H-J back-pedaling quite a bit,” said Peevey. “All of the kids put forth a tremendous effort, and we got a lot of kids in late that got some nice playing time. We came out injury-free, which is always a blessing.”

And what about the three first downs the Bears held H-J to?

“We really played well and we put a lot of pressure on them,” said Peevey. “H-J is completely changing their offense this year, going from the Slot-T they ran for years to the Spread. In time, Coach (Zach) Bass and the Hawks are going to be pretty good. It takes awhile to implement a new offense and they do have some talent.”

Peevey and the Bears coaching staff are preparing the players hard with their battle against WO-S.

“After seeing them on film, they are the same old Mustangs, speed everywhere that you have to somehow try and contain, and Coach (Hiawatha) Hickman and his staff have done a good job with them. It’s like they have not missed a beat,” said Peevey. “I’m really impressed with their offensive line, and there are experienced guys in there that know how to get after it. Their quarterback, Keyshawn Robinson, is a playmaker. The experience he got as a sophomore last year was huge and he looks even better now. Jamal Shaw at running back and defensive back, he’s tremendous and I see he just committed to the University of Houston. It’s not just Shaw at running back, they have a full stable of thoroughbreds back there.”

Peevey also knows another change with the Mustangs.

“They are going more up tempo and that helps them so much because they all look to be in tremendous shape,” said Peevey. “We’ve got to match them, do our job and stay focused.”

Peevey also likes what the Mustangs bring to the defensive table.

“Same old Mustangs, they fly to the ball, they put heat on the quarterback and they thrive off stopping the running game,” said Peevey. “They did that well against Nederland. We’ve got to find a way to move the chains and try to keep them off balance some. That’s always a tough chore when you face them.”

“We expect a great atmosphere and we look forward to the matchup,” said Peevey. “Playing this game, I believe, is going to help make both of us better. Our guys know their guys and vice versa, which makes it even that much more fun. I expect a great football game with two groups of great kids.”