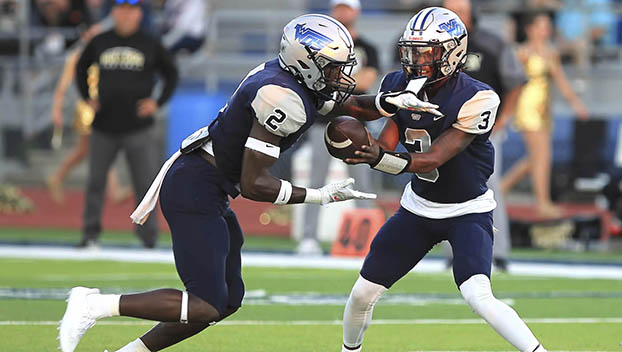 WEST ORANGE — It was all systems go for the West Orange-Stark Mustangs in their season opener.

The Mustangs dominated the Nederland Bulldogs in all facets of the game and now turn their attention to Little Cypress-Mauriceville.

The Mustangs take on the Battlin’ Bears Thursday night at Bridge City’s Larry Ward Stadium in the Orange Bowl.

“We executed what we wanted to do and the kids came out firing on all cylinders,” said Hickman. “The effort the kids have put forth, going all the way back to February really showed. The condition work they put in definitely showed. We had very few cramps and no injuries to really speak of. There were no jitters. They were excited to show what they could do.”

The Mustangs piled up 429 yards, 368 coming on the ground, against the Bulldogs.

“Offensively, the kids ran the game plan we had really well,” said Hickman. “Our big guys controlled the action up front. Keyshawn Robinson did some solid things at quarterback. Our stable of backs were awesome, and each one of them brought something to the table. Overall, we were pleased with the effort. There are a few things to clean up, especially with some of the false starts, but that’s going to get better.”

“Typical Mustang football, kids flying to the ball on every down,” said Hickman. “Nederland likes to chunk it, but we were able to get some pressure on them. I thought our secondary was outstanding.”

Hickman sees some similarities between the Bulldogs and the Battlin’ Bears on offense.

“Nederland showed us a passing game, which we hadn’t seen in scrimmages, and LC-M will, too,” said Hickman. “There’s a big difference. The Bears have No. 7 at tailback in Da’Marion Morris. That kid is phenomenal, and they love to move him around and get him in space. You almost have to put two guys on him and spy on him every where he goes.”

Hickman also likes what the Bears do with their passing game.

“The (Dean) Reynolds kid is a good quarterback that has an all-around game,” said Hickman. “He has a really good arm and can find the open receivers. He’s also so dangerous when he tucks it in and runs.”

The Mustangs will face a formidable defense in the Bears as well.

“They totally controlled Hardin-Jefferson. I don’t know how many first downs the Hawks got, but it sure wasn’t many,” said Hickman. “The Amier Washington kid at defensive end is one of the best in the area. They moved him around some against H-J, and they had no answer for it. The Jarvis Riley kid, he moves around well too. Their whole defensive front is a challenge for anyone. They also look like they have solid linebacker play too.”

WO-S wants to be able to move the ball and keep penalties and turnovers down.

“We want to utilize our talent, play up-tempo and get our athletes up the field,” said Hickman. “We want to limit the mistakes and not put ourselves in third-and-long situations. We want to grind it out, but do it fast and keep those chains moving.”

Hickman feels the game is always a good one for both communities.

“The Bears had such a great season last year, and Coach (Eric) Peevey has done an amazing job with their program,” said Hickman. “The Bears, they look like they are ready for another good season and they are going to do big things in their district. You can feel it. It’s a game we have to keep on the schedule because the community loves it and it brings a lot of folks together. We’re looking for a great atmosphere for sure, a little Thursday Night Football coming everybody’s way.”