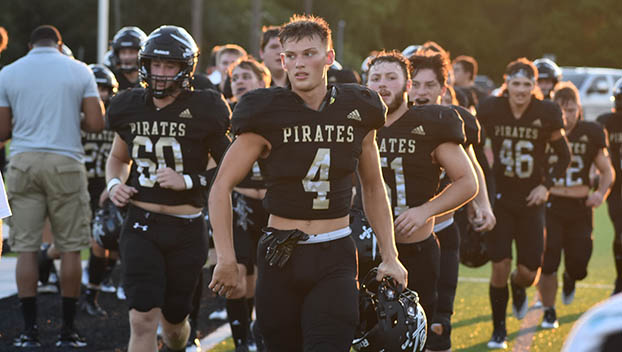 VIDOR – It was tough sledding for the Vidor Pirates in their home opener.

The Pirates opened their 2022 football campaign with a devastating 48-7 loss at home to the Silsbee Tigers.

From the opening minutes of Friday night’s action, it was clear there were two drastically different teams lined up across from each other. Players typically must shake off some rust in the first few games of a new season, but the Pirates’ offense looked disjointed and was flagged for a false start six times. Vidor’s squad also lacked the energy one would expect in a season opener, much less in front of their home crowd — a stark contrast to a Silsbee team that flew all over the field throughout the entire game.

Silsbee received the opening kickoff, and it didn’t take long for them to assert themselves. Star junior receiver Dre’lon Miller rushed for 17 yards on the first play from scrimmage, then followed it up with a 40-yard touchdown reception on the next play. The Tigers took a 7-0 lead just 48 seconds into the game.

The Pirates were forced into a quick three-and-out on their first drive, but regained possession with an interception by Brayden Root. He returned it 23 yards to Silsbee’s 17. Jarrett Odom bounced a rush attempt around the right tackle, breaking free for a 17-yard touchdown.

With the score tied at 7-7, Vidor’s defense stepped up and forced the Tigers to turn the ball over on downs. However, the Pirates offense struggled to move the ball, punting it away. Silsbee struck again when Miller took a short checkdown pass 51 yards to the house, retaking a 13-7 lead despite a missed PAT.

Vidor’s offense sputtered out yet again, but Silsbee’s unit had no such problems moving the ball. The Tigers strung together a 10-play drive capped off by a seven-yard touchdown rush by Jayron Williams. They scored yet again when Jaquez Carter scooped up a blocked punt and returned it for a 35-yard scoop and score. The onslaught continued as quarterback Mason Brisbane connected with Max Brisbane for a 20-yard touchdown to end the second quarter.

Silsbee entered the half with a commanding 33-7 lead, also racking up over 250 yards of total offense — a stark contrast to the 69 yards produced by the Pirates.

The same story played out throughout the second half too. The Tigers surged further ahead as Miller hauled in a 44-yard reception for another touchdown, his third of the night. Midway through the fourth quarter, running back Kevin Martin broke loose for a 53-yard rushing score. The Pirates rough night came to a merciful end, with the scoreboard showing 48-7 in their opponent’s favor.

Heading into next week’s home matchup with Santa Fe on Sep. 2, the Pirates will have their work cut out for them.

The Pirates will remain at home next week as they will play host to Santa Fe Friday.