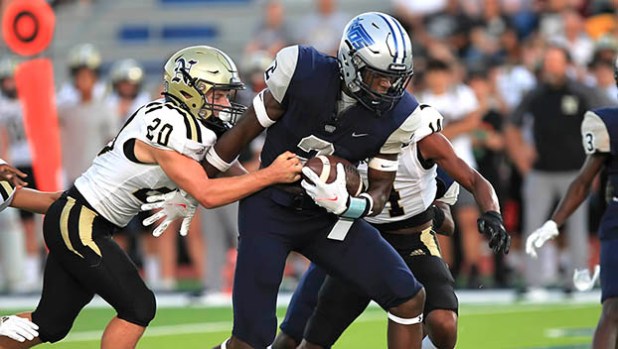 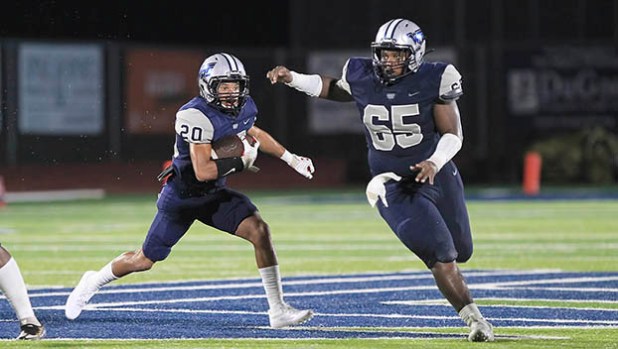 WO-S running back Raymond Mallett, Jr. (20) looks to get a block from teammate Ja’kalen Jenkins against Nederland. (Mark Pachuca/Orange Leader)

WEST ORANGE – It was a night to remember for the West Orange-Stark Mustangs Friday night in their season opener against the Nederland Bulldogs.

However, nobody was more happier than first-year Mustang head coach Hiawatha Hickman, who nailed down his first victory after WO-S pounded out a 32-0 victory at Hooks Stadium.

The Mustangs (1-0) controlled the game from the onset as the Bulldogs (0-1) simply had no answers on offense or defense.

“I’m jut so darn proud of the kids, they put forth an incredible effort,” said Hickman. “We tell them that every day, if the effort is there, good things usually come from it. It ws a tremendous win against a good football program in Nederland. It was a fun game for the kids and the staff but starting tomorrow, it’s going to be back to business.”

The Mustangs racked up 429 yards of total offense. Their running game, sparked by their “big boys” up front, shredded the Bulldog defense to the tune of 368 yards on 41 carries.

“We set the tone with our first drive,” said Hickman. “Our big hosses really controlled things against Nederland’s defensive front and we got rolling. All of our backs stepped in and ran hard and our quarterback played well. It was just a great all-around game, a total team effort for sure.”

All of the backs saw plenty of action and racked up nice numbers.

The Mustang defense limited a young Nederland team to just 134 total yards. Bulldog quarterback Adam Trosclair was held to 89 passing yards as he only completed 8-of-27 attempts. Reeve Barrow did have two catches for 40 yards. The Nederland ground game was worse as they mustered just 45 yards on 22 carries. Running back Hubert Thomas ran hard, finishing with 67 yards on 13 carries.

“Our defense was typical of a Mustang defense, that’s what we thrive on around here,” said Hickman. “We had some good play by our defensive backs in helping control them. That Trosclair kid can really sling it. I must say this, Nederland is going to improve as the season goes a long. They are young and they had a lot of sophomores out their tonight. They’ll be experienced for sure next year when we have to roll into Nederland.”

The Mustangs dominated the first half with a punishing running game and a stifling defense to lead 20-0 by halftime.

The Mustangs churned out 257 total yards in the first 24 minutes, including 237 yards on 26 rushes.

Meanwhile the Mustang defense limited the Bulldogs to just 56 yards in the half.

WO-S wasted little time getting on the board on the first series of the game, zipping 62 yards in five plays.

Shaw hauled in a 15-yard pass from Robinson on the series and broke loose on a 35-yard gallop to the Bulldog 1. Jailen Brown capped it with a one-yard touchdown run off right tackle. The extra-point failed but the Mustangs snagged a 6-0 edge with 9:55 in the first quarter.

The Mustangs put together an impressive three-play, 71-yard scoring drive in the second quarter.

Helm broke through the Bulldog defense for a 51-yard dart deep in Bulldog territory. Robinson promptly cut loose for a 26-yard keeper to the Nederland 3 and Brown got into the end zone again with a three-yard rumble around right end. The two-point conversion run failed but the Mustangs held a 20-0 edge with 3:13 in the half.

Robinson had 85 yards on six carries in the first half and completed 3-of-5 passes for 20 yards. Helm zipped for 78 yards on four totes. Shaw had 50 yards on five carries.

Trosclair completed 6-of-19 passes for 85 yards in the half with Reeve Barrow hauling in two of them for 40 yards. The Bulldog running game was stifled, getting a minus 29 yards on 10 carries with the biggest loss of 26 yards coming on a mishandled punt snap.

The Mustangs erased Nederland’s only major threat in the first half early in the second quarter. A bad snap by the Mustangs was recovered by Bulldog Trent Howard at the WO-S 41 with 9:18 in the half.

On fourth-and-11, WO-S received a pass interference call that gave the Bulldogs new life at the Mustang 29. However, the Mustang defense rose up to force a two-yard loss on  Thomas and forced Trosclair into two incompletions. Bulldog kicker Carter Piletere tried to get the Bulldogs on the board but his 46-yard field goal attempt went low and wide left with 6:20 in the half.

The Bulldog last big threat came on the first series of the third quarter, Thomas had 62 yards on six carries on a nice drive, including a sharp 35-yard dart to the Mustang 19. The Bulldogs got all the way down to the Mustang 1 but on fourth down Trosclair received a bad snap and the Mustangs took over on their own 13 with 4:36 in the third.

Mallett, Jr. then  sent the Bulldogs reeling as he rushed right up the gut and through almost the entire Nederland defense for a 73-yard touchdown explosion, pushing it to 26-0 with 3:26 in the third.

The Mustangs wrapped up the scoring with 0:15 in the third when Turner, Jr. teamed up with high-octane receiver and return man Dakarion Judge on a 41-yard touchdown strike down the right sideline.

The Mustangs will now turn their attention to Little Cypress-Mauriceville as they will take on the Bears at Larry Ward Stadium in Bridge City Thursday night.