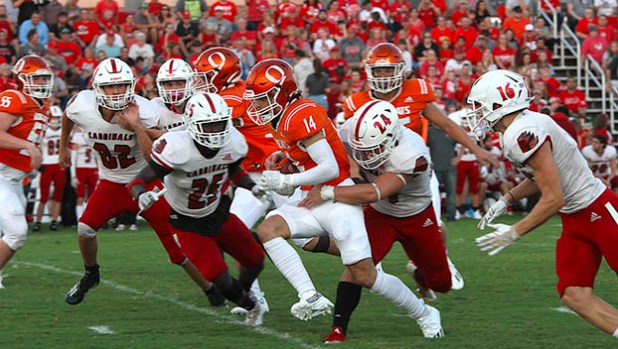 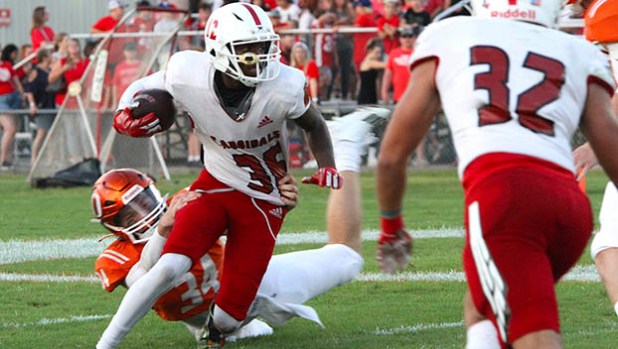 ORANGEFIELD – It was another hard-fought battle in the Bayou Bowl as friendly rivals in the Orangefield Bobcats and Bridge City Cardinals met face to face again after being district opponents the last couple seasons.

The Bobcats have moved down to Class 3A this year but proved that they are just as formidable.

The Bobcats took care of the Cardinals 28-9 at F.L. McClain Stadium Friday night.

The Bobcats started the season off on the right foot with a sound victory.

Defense and turnovers kept the Bobcats (1-0) in control of the game from start to finish.

“Our defense allowed our run game to take control of the game,” said Bobcats’ Head Coach Josh Smalley after the game. “We had three big interceptions that really got us going too.”

The Bobcats definitely took care of business on the defensive side of the ball. They had three interceptions from Kane Smith, Kyle Micheal and Caleb Fregia on the night.

Smith would find his interception on the Bobcats own 3 and took it to the house for a long 97- yard pick six.

The Cardinals (0-1) were held to just 23 yards rushing on the night and managed to get 100 yards in the air from sophomore quarterback Hutch Bearden.

The Bobcat defensive front made things difficult for the Cardinals, utilizing constant pressure and moved the young quarterback out of the pocket and on the run most plays, leading to missed opportunities and unfortunate mistakes.

The bright side is that Bearden seemed to be figuring it out as the game went on. The final drive, and only scoring drive, was the best the Cardinals showed all game. Bearden would found both Braylen Collins and Cale Breaux for big passes, including the touchdown to Breaux from 22 yards out. The Cardinals showed signs of life, but it was just a little too late into the game.

Offensively the Bobcats controlled the tempo of the game with 40 rushing attempts from five different players. Cameron Dischler got the most touches, but would only get 50 yards on 20 carries for the night. The Cardinals were able to tie Dischler up at the line, but Case Singleton would get a few big plays, including the longest rush for the team at 18 yards.

The Bobcats stop the Cardinals on the first drive, allowing just a yard and took over with decent field position at their own 32. They opened with a trick play, a pass from their running back Dischler to Morgan Sampson for 24 quick yards. Gavin Perry-Koci and Dischler got the run game going early, plowing into the Cardinal defense.

Perry-Koci got around the edge from 15 yards out and finished the quick drive with a touchdown. Ty Butler booted in the extra-point to make it 7-0 Bobcats with 6:49 left in the first quarter.

Bobcat Kane Smith picked off Bearden in the red zone, for a long Bobcat touchdown. Bearden tried to force a pass over the middle, but Smith had the read and jumped the route at the 3. His teammates picked up blocks immediately and Smith was off to the races for a 97- yard touchdown. Butler nailed the point-after and the Bobcats took a 14-0 lead with 3:16 left in the first quarter.

The Bobcats gave away a couple points, thanks to a muffed punt in their end zone. The Bobcats would got stuffed midway through the second quarter thanks to the Cardinal defense rising up. A bad snap on the punt attempt sent the ball rolling out of the back of the end zone, resulting in a safety for the Cardinals with 6:51 left in the half.

Orangefield opened up the second half with a long six-minute drive for another touchdown from Dischler. A methodical drive controlled by the run game, and the offensive line making gaps to move. Dischler and Case Singleton took over and carried the march. They would trade off short pops to just work their way down the field. Dischler eventually punched it in on a fourth down attempt from the 2, giving the Bobcats a 21-2 cushion with 5:53 left in the third quarter.

The Bobcats forceed a fumble on the very next kickoff and took advantage of the premium starting position inside the Cardinals 10. Brayden Parker dropped back and found Sampson for another pass completion, this time going for six yards and a touchdown, making it 28-2 with 4:13 in the third.

Bridge City got its offensive touchdown thanks to a big 22-yard pass from Bearden, who spotted Jaden Martinez in the back corner of the end zone. Jerris Brown would work it in, getting the offense within striking distance before tossing it over their head for a touchdown. The Cardinals were able to trim it to 28-9 with 3:21 remaining.

Both teams will be at home next week.

Orangefield will host Spring Legacy Friday while the Cardinals return home to take on the Buna Cougars.