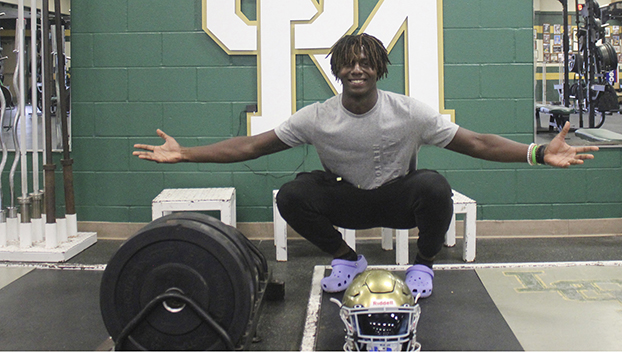 But he does know how to stop it, shutting down opposing running games.

Landry is looking for a banner senior season with the Bears as they look to make another big run after going 11-3 last year and advancing to the fourth round of the playoffs for the first time since 1997.

“We’ve been getting after it all summer long and we can start to see that hard work pay off,” said Riley. “We’re so much stronger than we were last year by leaps and bounds. We’re expecting to have another amazing season.”

LC-M coach Eric Peevey says the best thing about Riley is his growth compared to the start of his junior year.

“He’s been up here busting his tail and has gotten so much stronger,” Peevey said. “He really pushes the younger guys, too. He has fun with it but he can be tough on them when he has to be.”

Riley gladly accepts the leadership aspect of it this year.

In 2021, he looked up to a bunch of great seniors and wants to return the favor to the younger guys in 2022.

“I’ve really been involved in pushing those younger ones because the varsity level is a whole different beast,” he said. “I love having fun with them and keeping them on their toes, while also keeping them in line, too.”

One thing for certain, Riley, an All-District selection last season, pushes opponents around with his strength at the defensive end spot.

“I feel I had a pretty good year last year but I knew after the season I wanted to improve, get stronger and quicker with some of my moves,” said Riley. “I really worked hard on the squats this summer, improving my knees and I improved a ton on the bench to strengthen my upper body, too. I feel really good going into the season.”

Riley is part of a superb tandem at defensive end with his cousin, Amier Washington, who verbally committed to Texas Tech, manning the other side.

“Amier is amazing and he loves to get after those quarterbacks, for sure,” said Riley. “He puts a lot of heat on everybody he faces and is intimidating. I want to do the same, too. Don’t get me wrong, I like to get after the quarterback, but there is just something about bringing down running backs that really gets me going.”

Riley is not shy talking about his comrade Washington.

“I love messing with Amier and we work so well together where we know what each other is thinking,” laughed Riley. “Ask him who taught him those swim moves and horse smashes. That would be me.”

Riley certainly likes the Bears’ potential, but he knows the season is a long one.

He said they must take it game by game and get better every week.

“There are different phases of the season and you have to plan like that,” Riley said. “You can’t be looking ahead. You have to look at what is right there in front of you.”

So what does Riley do when he’s not preparing for games?

“I’m a film nut. I love watching ways in which I can get better and where my flaws are. If I’m not doing that, I like to be on a field somewhere. My goal is to play at the college level, and I’m going to keep working hard to achieve it,” he said.

Peevey said he is proud of Riley, noting the senior has goals he’s going for with a lot of energy.

“He’s constantly wanting to be better, and that is something his teammates can feed off of,” the coach said.

Riley is hoping for the same type of atmosphere from Battlin’ Bear fans this year.

Seeing all of those people in the stands last year was awesome, and the players want everyone to pack stadiums again.

“School spirit here has been awesome,” said Riley. “One of my favorite things to do is to lock pinkies with all my teammates as our band plays music at the end of games.”

The Bears may not have a home game until Sept. 30 due to new turf field being installed.

“We’re not worried about that stuff,” said Riley. “Just give us a field and a ball, and we’ll be ready to get after it.”