VAN WADE — Are you ready for some football, Orange County! 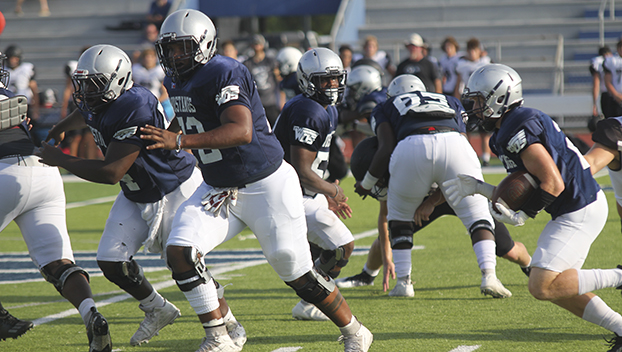 The WO-S running game was impressive against the Vidor defense in scrimmage action. (Van Wade/Orange Leader)

High school football season will lift off this week with a slew of good games featuring Orange County teams.

All the teams had great offseasons, even better summer workouts and have really gotten after it in their scrimmages.

I’ve been at it a long time and I’ve seen players and coaches fired up for the upcoming season. Just as much, or even more for the 2022 season, all of the fan bases are jacked up for what could be in store.

There are some big matchups in non-district games, featuring rivalry games. That certainly gives fans something to look forward to. District play gets rolling in late September, and the first week of October is when the “real” bragging rights begin.

The Little Cypress-Mauriceville Battlin’ Bears will be the first team to get everyone’s juices flowing as they take on the Hardin-Jefferson Hawks Thursday at Beaumont’s Memorial Stadium.

The Bears probably won’t see a home game until Sept. 30, when they welcome in Spring Legacy for Homecoming due to their new turf field not being ready. But I’ve seen the Bears and they should be stout again, even if they had to play a game in a big parking lot. I see coach Eric Peevey utilizing the “Road Warrior” mentality to the Bears’ advantage.

The first week also gives us the Bayou Bowl, as the Bridge City Cardinals venture to Orangefield to face the Bobcats Friday. Thank you Orangefield coach Josh Smalley and Bridge City coach Cody McGuire for keeping this game going, despite not being in the same district. It’s a treat for everyone involved.

Over at Vidor, Jeff Mathews is leading the Pirates into hostile territory to face the Silsbee Tigers. The Pirates have a slew of returnees from last year’s district No. 1 playoff seed, so they want to get off to a great start.

Perhaps the most anticipated game this week is at West Orange-Stark, where first-year head coach Hiawatha Hickman and a revamped Mustangs coaching staff welcomes in the Nederland Bulldogs.

Coach Hickman, he knows what it is about and it certainly isn’t his “first rodeo” after playing a key role as an assistant during the Mustangs’ recent state runs. After observing two scrimmages, it doesn’t look as if the Mustangs have missed a beat. The players and coaches are making a smooth transition. I can’t wait to see what the future holds.

One game marked on the calendar is Thursday/Sept. 1.

Here is a trivia question people can utilize for years to come: Who were the first two teams to play a regular season game at Bridge City’s Larry Ward Stadium?

If you guessed the Bridge City Cardinals, that would be wrong.

Due to LC-M’s field not being ready, the Bears and Mustangs will tangle at The Ward.

Get ready BCISD, you’re going to have a full house for a Thursday night game. Everyone get your popcorn ready for that one for sure.

Myself, I feel ready to rumble out for another season. It became official for sure at the WO-S-Vidor scrimmage last week. It was rare for a scrimmage, but the Mighty Mustang Band was there and rocking Hooks Stadium. There is just something about hearing a band for the first time that gets the juices flowing.

No, I wasn’t break dancing or anything. My bones are no longer as functional, but I broke a move or two.