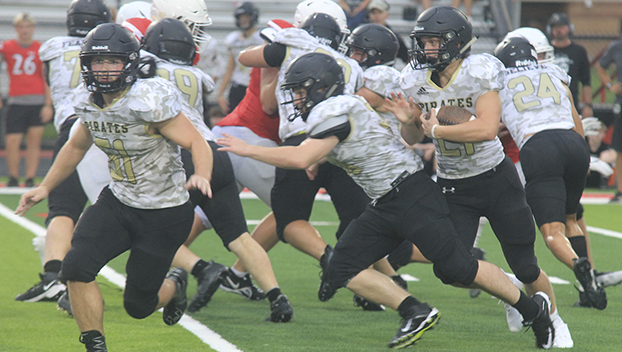 The Vidor running game gets it going against Bridge City in a scrimmage. The Pirates host Silsbee Friday to open the season. (Van Wade/Orange Leader)

VIDOR – For Vidor football fans, they will get a little treat this Friday as their Pirates host the Silsbee Tigers for a season opener.

The Pirates and Tigers were originally going to play the opener at Silsbee, but due to Silsbee’s new turf field not quite being ready, the game shifted to Pirate Stadium.

“It’s a tough deal for Silsbee because their field is so close to being done,” said Vidor coach Jeff Mathews. “We’ve been in that situation before, where everything was cutting it close. Instead of going somewhere neutral, we agreed with Coach (Randy) Smith of Silsbee to play here, and we’ll head to their place next season. It all worked out fine.”

Fine, is how Mathews described the Tigers after seeing them on film in Silsbee’s scrimmages against Livingston and Orangefield.

“They have amazing looking kids,” said Mathews. “They were pretty good last year and played a lot of sophomores and they are a whole lot better this year. Now that big class is all juniors and they look darn good. They are very comparable to West Orange-Stark as far as talent and athletic ability.”

Mathews hopes the Vidor offense matches the physicality of a strong Tigers defense.

“Their linebackers are big and they fly to the ball. You have to get some hats on those guys,” said Mathews. “We just have to stay patient, move the ball down the field and stay away from the penalties and turnovers that hampered us in our scrimmage at West Orange. “

Mathews will look to the Pirates defense to slow down a slew of weapons.

Silsbee likes to spread the ball around with a good quarterback and good backs.

Then there is receiver Dre’lon Miller.

“That kid is amazing, and one of the best receivers I’ve ever seen,” Mathews said. “It felt like it had over 300 yards receiving against us last year. We’ve got to try and contain that.”

Mathews feels the non-district test with the Tigers will help the Pirates improve tremendously. The Pirates have a stout non-district schedule that includes games with Silsbee, Santa Fe, Brazosport, Lake Charles St. Louis and Trinity Christian.

“Four of the five made the playoffs last season,” explained Mathews. “Silsbee is going to be tough right out of the chute. We don’t know a lot about St. Louis, but they have always been a solid private school in Louisiana.”