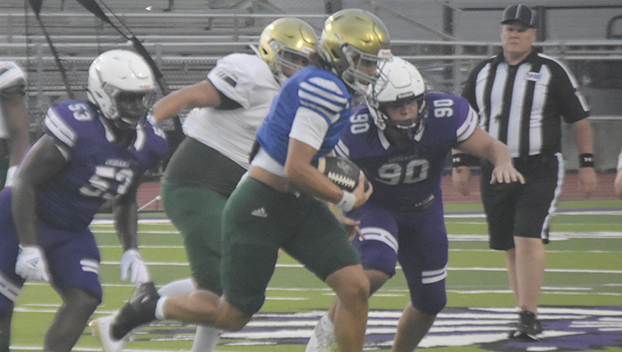 LITTLE CYPRESS – After seeing a lot of positives in their two scrimmage tilts, the Little Cypress-Mauriceville Battlin’ Bears are honed in on the Hardin-Jefferson Hawks for their season opener Friday at Beaumont’s Memorial Stadium.

The Bears are on a quest to make a deep run again for second-year head coach Eric Peevey after sharing the district title last season and advancing to the fourth round of the playoffs for the first time since 1997, finishing a tremendous 11-3.

The Bears got in some nice scrimmage work against Orangefield and Port Neches-Groves the last couple weeks according to Coach Peevey.

“Both scrimmages were definitely very beneficial,” said Peevey. “Orangefield always gets after you and is always so physical. We had to match that style and we did pretty well. PNG, those guys have the most humongous offensive line I’ve seen in awhile. They really tested our defensive front.”

Peevey likes where the Bears are at overall.

“We saw a lot of things we wanted to see, and the kids all gave super efforts,” said Peevey. “Scrimmages also give you a lot to look at as far as improvements. There are still a lot of things we must see as far as getting better in certain areas, but that’s the way it is this time of the year.”

Peevey and the Bears coaching staff are getting ready for a Hawks team that is tough to figure out going into the first game. First-year head coach Zach Bass, who took over for former head coach Dewayne DuBois, switched the Hawks offense around.

Instead of the traditional Slot-T style offense ran for years, Hardin-Jefferson switched over to the Spread.

“We were fortunate to be able to get in our scrimmage with PNG in two days due to the weather, but Hardin-Jefferson wasn’t quite as fortunate,” said Peevey. “They scrimmaged Livingston and both teams got in about 20 plays before the weather got them last week, so we really don’t have any film.”

So what does Peevey think the Hawks bring to the table?

“H-J always has nice athletes and usually good size,” said Peevey. “We know they will try to spread things out and then they can go into a two-tight end set. With a first game, a lot of things can be a surprise and you have to make adjustments. You just have to make the plays and be sure to limit penalties and turnovers.”

The game with the Hawks is just the first tough non-district game the Bears have slated before opening district play Oct. 7 at Vidor. After H-J, the Bears lineup against the likes of West Orange-Stark, Bridge City, Houston Kincaid and Spring Legacy.

It wouldn’t be Orange County football if we don’t play people like WO-S and Bridge City,” said Peevey. “The Mustangs, everyone knows what they are about and they are loaded again with Coach (Hiawatha) Hickman leading the way now. Bridge City was much improved with Coach (Cody) McGuire last year and will be even better. Hardin-Jefferson has a new style of football with a new coach. We know Houston Kincaid is one of the best private schools in the state every year. Spring Legacy, that’s a new one for us and we’ll know more about them when the time comes.”

Due to a new turf field under construction, the Bears’ first home game could be Sept. 30 for Homecoming against Spring Legacy.

“We feel pretty confident that Sept. 30 against Spring Legacy, we’ll be able to play at home,” said Peevey.