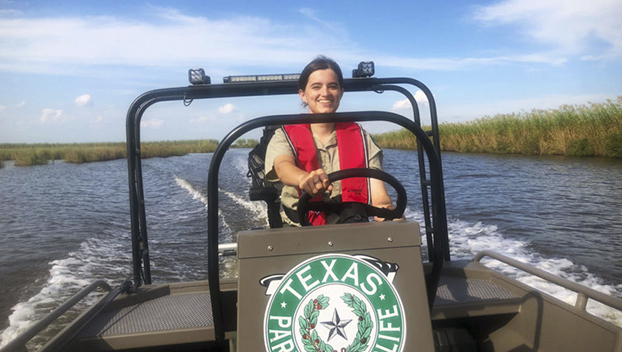 SABINE PASS — Those 18-32 considering a career in nature can first test it out through the Texas State Parks Ambassador Program.

Applications recently opened for the South and East Texas regions.

Typically the program ends at age 30 but was extended this year due to previous years being eliminated due to COVID.

“It’s a chance for them to apply, get some experience working with some of these parks and get the chance to try different jobs and opportunities in the parks to see if they want to pursue it as a career,” said Sea Rim State Park Superintendent Nathan Londenberg. “Also, it gives them the opportunity to develop…firsthand knowledge of why state parks are so important and how they protect wild places. They can help spread that message and continue to educate people about the importance of state parks.”

New this year, Londenberg said, is the addition of mentor Maddie Martin, who serves as the interpreter at Sea Rim.

“That actually has nothing to do with language,” she said. “I interpret parks and natural resources for the public.”

Martin has been with Sea Rim since February 2021, pursuing a career in nature following a childhood that was immersed in it.

“My parents took me camping a lot when I was a kid,” she said. “We did backpacking, a lot of horseback riding, just anything they could do to get my brother and I out of the house. I thought I had had such a good time in these spaces, and I wanted to make sure other people could have those formative memories at these state parks. I wanted to be someone who could provide that for them.”

As a mentor for the ambassador program, Martin will serve as the primary point of contact for those participating and help them carry out projects or contact necessary people or entities for community outreach.

Ambassadors must complete 40 hours of service from January to June of 2023, which can also include social media outreach and service work at the park.

“As State Parks approaches its continual, there are a lot of people who have worked for this agency for all of their lives,” Martin said. “And as they start to leave, we need new people with new ideas coming in to protect our natural spaces. Once they’re damaged, once they’re passed that certain point, then they’re gone. We need to pass that mission on to the next generations so the wild spaces of Texas will be around for everyone to enjoy.”

According to Texas Parks and Wildlife, ambassador applicants must:

Applications are available at TPWD.Texas.Gov.