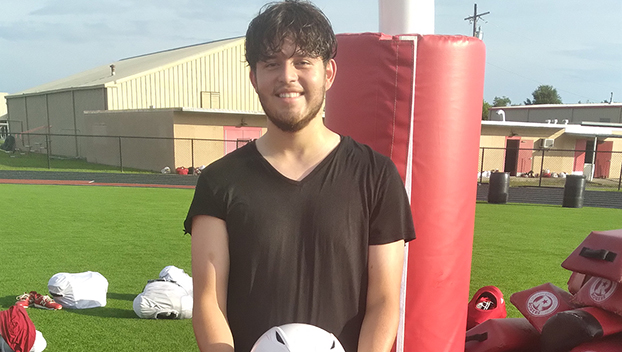 BRIDGE CITY – To make everything click on offense, teams need a solid foundation up front in the offensive trenches, and the Bridge City Cardinals have that in senior right guard Sebastian Sandino.

Sandino certainly likes what he sees in the Cardinals as they head into their season opener Friday when they visit the Orangefield Bobcats in the Bayou Bowl.

“We’re ready to go for sure. We’ve been looking forward to this for a long time,” said Sandino. “All those days getting up here around 4 a.m., running, lifting weights, doing drills, now is the time to make all of that pay off.”

Sandino saw plenty of time as a junior on the offensive front in 2021.

“We improved so much last year from the year before and actually we could have been better than what we were,” said Sandino, who saw the Cardinals improve from one win in 2020 to four in 2021. “We had a bunch of seniors last year and we played hard but we got hit by a bunch of injuries that really hurt us. We have the potential to be better this year and I think we will, if we avoid injuries.”

“Coach McGuire brought in a lot of discipline and a lot of hope,” said Sandino. “You can tell how much he cares about us, on and off the field. He’s the type of coach you want to get things done for and you want to bring your best effort every single day in practice. It would be awesome to get him to the playoffs in his second year.”

Sandino has put on some extra weight and more solid muscle going into his senior year.

McGuire said Sandino knows what it is about up front and really helps with the younger guys as a leader. He can directs things up front.

At one time, Sandino played a lot at tight end but the coaches put him on the offensive line last year and he loves it.

“Last year I played at right guard, played some at right tackle and left guard too,” he said. “Anywhere my team needs me, I’m ready to go.”

Sandino really enjoys playing right guard, where he will start this season.

“Playing right guard, I kinda see everything that is in front of me and I can help guide the line a little bit by reading the defense,” said Sandino. “If a defense is in a three-man front, I know I can kinda peel off and help the rest of the guys on the line, and I can get good looks where the linebackers are going.”

Going into the first game and a couple scrimmages, Sandino realizes the Cardinals offense will continue to grow.

“The scrimmages were really good for us,” said Sandino. “It definitely showed us areas we have to work on and we also made some great plays that give us high hopes. We’ve got some young guys trying to make an impact, especially on offense, but they are working hard to improve at every practice.”

With 10 games ahead of them, Sandino is ready for the Cardinals to make their mark.

“We just have to believe in what we are doing and rely on the hard work we put forth the last few months to pay off,” said Sandino. “Our goal is to win our district, make the playoffs and bring home a trophy. We just have to concentrate on each opponent one week at a time and improve every week.”