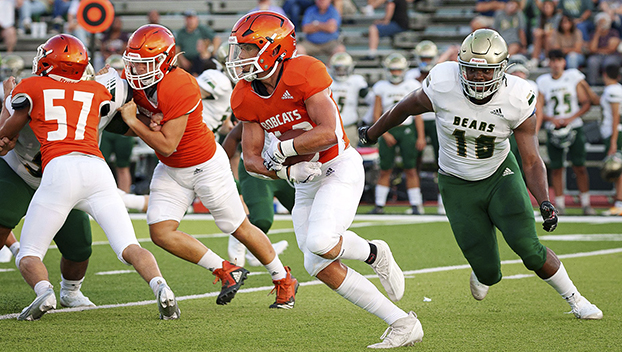 ORANGEFIELD – After two grueling scrimmages against Class 4A schools that they learned a whole lot from, the Orangefield Bobcats are turning their attention to Bridge City as the Bobcats welcome in the Cardinals for the Bayou Bowl Friday.

“You are talking about two top 20 ranked teams in the state in 4A in their divisions,” said Smalley. “The effort the kids gave was super, and that’s what we are most proud of. They battled hard against two really good teams. I think they realized after those scrimmages that they can play with anybody. They were confidence boosters.”

The Bobcats have plenty to work on, especially in the trenches where they replace every starter from last season.

“We’re proud of those big guys because they made tremendous improvements from the LC-M scrimmage to the Silsbee scrimmage,” said Smalley. “We still have a long ways to go, but they are learning and just continue to get better. Hopefully we’ll see improvement week after week in non-district and be ready when district starts up.”

Smalley likes the way the offense moved the ball in the scrimmages but feels there is still plenty of work ahead.

The Bobcats must clean up penalties and turnovers.

“We fumbled the ball away at the Silsbee last week, and those things can haunt you when games get real,” Smalley said. “More times than not, if you have more penalties and turnovers than your opponent, it usually means a pretty tough night.”

This week, the Bobcats have turned their attention fully on the Cardinals.

Smalley wants the Bobcats to be ready for a physical defense.

“They have a lot of key guys back from a good unit last year and they really fly around,” said Smalley. “The Mason Pruitt kid is phenomenal at linebacker. They are strong and physical up front, and their secondary is really good. It’s going to be a really competitive game, and I know both schools are looking forward to it.”

Running back Cameron Dischler and quarterback Brayden Parker are back to spearhead the Bobcats offensive backfield. Dischler zipped for over 1,400 yards and 19 touchdowns last season.

“Dischler was a ‘hoss’ last year and we expect a lot out of him again, and he’s the type of kid that would run through a brick wall and play anywhere we ask of him,” said Smalley. “Brayden is the type of kid that lets nothing rattle him. He always has tremendous composure and he loves to compete.”

There will be plenty of talent to get the ball to in the backfield.

Gavin Perry-Koci is back at a tailback spot after having success last year. Also expected to see a slew of carries are Kyle Michael, Lane Gipson, Mason Manning, Case Singleton and Kane Smith. A lot of those guys will also see time catching the ball on the outside as receiver threats.

“We’ve got a really good group we can mix in and out of the backfield,” said Smalley. “Perry-Koci, he showed he had ‘wheels’ last year and he’s even faster now. As usual, we have a bunch of guys that are playing on both sides of the ball, so its good to have some depth like we have.”

Smalley is eager to see what the season holds for the Bobcats.

“We’ve had a great offseason for sure and have had an amazing turnout. It’s probably the best summer we’ve had,” said Smalley. “The kids have really bought in and have gotten so much stronger and faster.”