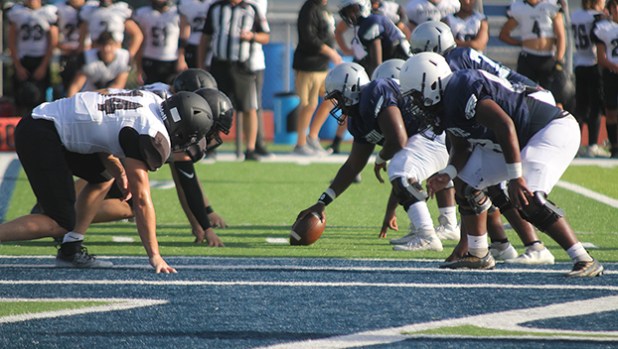 The Vidor Pirates and West Orange-Stark Mustangs got a lot out of their scrimmage. (Van Wade/Orange Leader) 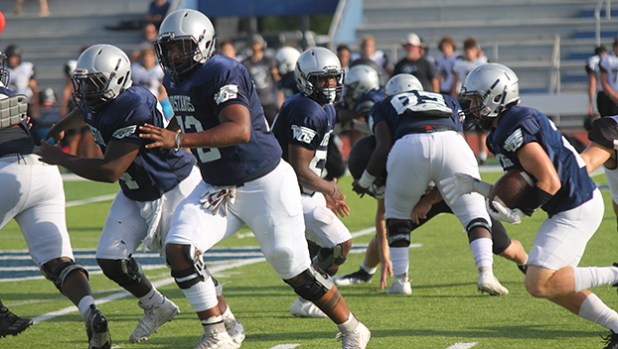 The WO-S running game was impressive against the Vidor defense in scrimmage action. (Van Wade/Orange Leader) 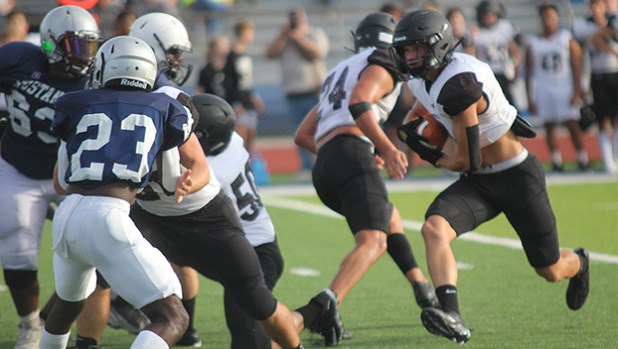 The Vidor offense had a few nice trap plays that resulted in nice yardage against WO-S. (Van Wade/Orange Leader) 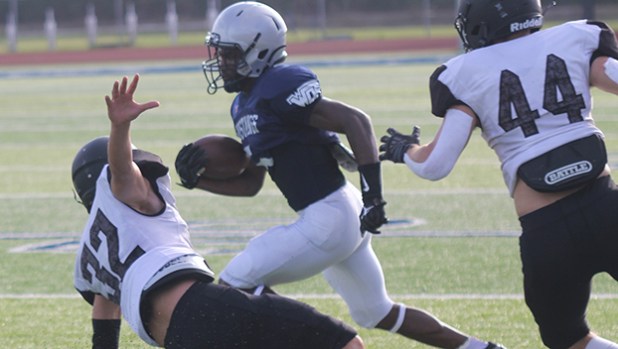 The WO-S offense opened up their passing game more in their second scrimmage against Vidor. (Van Wade/Orange Leader)

WEST ORANGE – Getting their final tuneup before the regular season cranks up next week, the West Orange-Stark Mustangs and Vidor Pirates got in some final preseason work at a scrimmage at Hooks Stadium.

The Mustangs ended up scoring three touchdowns while holding the Pirates scoreless.

WO-S scored on a pass, rushing touchdown and also had a fumble return for a touchdown.

Both teams had touchdowns called back due to yellow hankies.

Mustangs coach Hiawatha Hickman was elated with the Mustangs’ performance.

“We always love playing Vidor in this scrimmage every year because it gives us a gauge, especially with the physical play that the Pirates bring to the table,” said Hickman. “Defensively, I thought we were outstanding. The effort was there all night long. Vidor is going to do what they do, and they busted us pretty good with a few trap plays, but other than that, we were extremely pleased.”

Long-time Vidor coach Jeff Mathews was glad the Pirates got a look at the Mustangs as they prepare for their season opener at Silsbee next week.

“It was an eye-opener for our kids playing the Mustangs,” said Mathews. “We had some good moments, especially on defense, but there were a few disappointing things that we need to fix.”

Mathews really loves scrimmaging the Mustangs every year, mainly for one thing.

“Speed, that’s what you get when you face the Mustangs,” said Mathews. “That’s not something we can duplicate in our practices. It took us the first few series to adjust to that. That’s something we’re going to have to get better at as the season progresses.”

Hickman liked what he saw with the Mustangs offense as well.

“We opened it up a little more this week and we had several good pass plays and moved the ball around pretty well,” said Hickman. “Our running game got us going, too, and I thought the kids up front played well against a big Vidor bunch.”

Mathews is looking for some more mental toughness out of the Pirates.

“The Mustangs went down and scored early, then we moved all the way down the field and fumbled, had a touchdown called back due to holding and then they eventually brought a fumble back 80 yards and we were down 14-0 pretty quick,” said Mathews. “We had two fumbles and a big penalty. You can’t do those things against a quality opponent like WO-S. What bothered us the most is that seemed to take the life out of the kids the rest of the way. We simply can’t do that. We’re adding more time to our practices the rest of the week to straighten some of that out. Physically, we’re in pretty good shape, now we have to concentrate on being mentally sharper.”

Facing the Mustangs definitely helps the Pirates get more prepared when they face Silsbee in the opener.

“Silsbee, just like WO-S, presents a great challenge with their speed and athleticism,” said Mathews. “They also have some good size and they have looked good defensively in both of their scrimmages. We saw some good things out of both of our scrimmages. We also got a chance to see some young kids shine, and the kids learned a lot. Now it’s all about putting everything together and just getting after it.”

Hickman liked what the Mustangs gained in the action.

“We looked at the film and a lot of kids played well, and we’re evaluating several of them,” said Hickman. “We are really liking our depth right now. A lot of kids rose to the occasion and that was nice to see. The best thing is we’re going into our game with Nederland next week injury-free, that’s huge.”

The Mustangs host the Nederland Bulldogs in their opener next Friday.