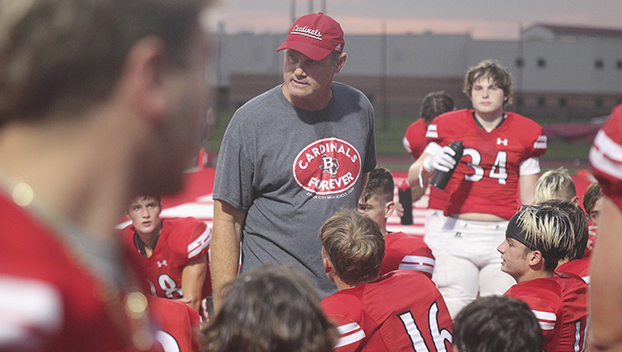 BRIDGE CITY – A week away from the Bayou Bowl clash at Orangefield to open the 2022 football campaign, the Bridge City Cardinals continue to make strides toward what they want to accomplish.

Cardinals second-year head coach Cody McGuire sees a lot of positive things out of the Cardinals after their first scrimmage with Vidor and hoped to get even more with a scrimmage at Woodville Thursday if weather allowed it.

“We’ve saw some signs of improvement for sure,” said McGuire. “The kids are really putting forth a great effort and we’re looking forward to the season getting cranked up for real next week, for sure.”

McGuire was pleased with the Cardinals after their first scrimmage tilt with Vidor.

“We learned a lot, and the kids realized after that we could match up with people in physicality,” said McGuire. “The kids had such a strong summer, working on their conditioning and they are in really good shape. The kids, after they realize they have the strength to get after people, understand they can have success.”

Coach McGuire was pleased with the defensive effort against the Pirates. The defense was sparked by senior linebacker leader Mason Pruitt.

Coach McGuire was also happy with sophomore quarterback Hutch Bearden, who had a touchdown pass to receiver Gavin Bodin.

“Hutch is showing us that he’s a competitor,” said McGuire. “He has nice tools for a sophomore, and the future looks bright with him there.”

McGuire is happy with his two scrimmages as the Cardinals defense prepared for the Slot-T of Vidor in their first battle and then met up with Woodville’s Spread offense.

“I like the looks we’re getting,” said McGuire. “Orangefield runs the Slot-T and they run it well, just like Vidor and we have the Bobcats the first week. Woodville runs the Spread well, throwing about 50 percent of the time and running the other 50. We have Buna the second week, and they are in the Spread.”

One key factor McGuire is looking for from the Cardinals is playing a complete 48 minutes.

“A lot of coaches seem to say this at this time of the year, but the kids need to work on their mental toughness at times, don’t let up after 24 minutes, you gotta play the whole 48,” said McGuire. “Against Vidor, we played a real solid first half and we didn’t carry that over into the second portion. Physically, I really think we’re ready. The kids just need to concentrate, know their assignments and where to go. That’s just as much part of the game as everything else.”

The Cardinals are anxious in preparing for next week’s opener.

“It won’t take much to get both teams fired up and ready to go at Orangefield next week,” said McGuire. “It’s a rivalry game, but it’s a friendly one. It should be a great atmosphere. Coach (Josh) Smalley does a great job over there, and their kids compete hard. We were able to catch their scrimmage against Silsbee, and they look really good. They have some great backs and nice size with their big guys. They play a physical brand of football for sure. It should be a good one to start the season.”