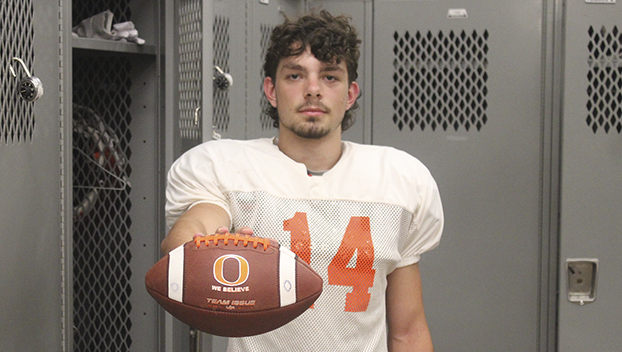 ORANGEFIELD – The Orangefield Bobcats have a little speed to burn, and they look to utilize it more this season.

Senior tailback Gavin Perry-Koci is the “Flash” the Bobcats will turn to out of the backfield. Koci-Perry had a solid junior campaign, rushing for nearly 500 yards.

His role will be expanded this season.

“Gavin can flat-out go,” said long-time Bobcats head coach Josh Smalley. “He’s a legit 4.49-second 40 guy. He played really well for us last season and he’s gotten even quicker this year, plus stronger. He’s the type of kid that when he gets past the line of scrimmage and sees the open field, you are likely going to hear the school fight song, because he’s going to score.”

Perry-Koci said he has always been pretty fast, starting with the seventh grade.

“The older I got and the more I worked out, it has just made me quicker,” said Perry-Koci. “I felt like I had a great summer, along with all of the other guys. All of us are stronger. Just as important, our agility has improved. That’s a credit to Coach Smalley and our strength coach, Coach (David) Kendrick.”

Perry-Koci looks to team up with All-District back Cameron Dischler, who had more than 1,400 yards last year, for a stout backfield.

“Cameron (Dischler) is an amazing back, and he can take it to the end zone on any play. He’s a bull when he runs,” said Perry-Koci. “I’m hoping to bring my speed and agility and help the best I can so everyone is not keying on him. We had Hunter Ashworth at fullback the last couple years and he was great. I’m not exactly a fullback, but if I can get to running well and break some nice runs, it can really help open things up for us.”

Smalley said Perry-Koci knows what it is about and that coaches are looking to give him a lot more touches in 2022.

Perry-Koci should help keep the pressure off Dischler. Defenses are going to have to know where he is at, and that pressure is a plus for Orangefield.

Perry-Koci will also be involved heavily in the Bobcats return game.

“I’m really looking forward to that, because it gives me a chance to have a little more space,” said Perry-Koci. “Anything I can do to help the team, I’m all in.”

Perry-Koci will also see some action on defense at cornerback .

Smalley is relying on Perry-Koci to help set the tone for the Bobcats.

“Gavin is a kid that does everything right,” said Smalley. “He knows what it is all about. He played on varsity some as a sophomore and played 11 games for us last year. He’s really good with the younger guys.”

Perry-Koci likes pumping up the young offensive line for the Bobcats.

“We’re counting on those big guys and they’re going to adjust well,” he said. “It takes time, especially when you go from playing on Thursdays to playing on Fridays. The pace is different, and I learned that a couple seasons ago. They really worked hard all summer, and you can see them improve from practice to practice. I have a lot of confidence in them.”

Perry-Koci and the Bobcats are looking forward to another solid campaign and is eager to play in their new 3A district after moving down a classification.

“We have the potential to be really good; we just have to believe in ourselves and stay together,” said Perry-Koci. “Going down to 3A is not that big a thing for me. There is just as much talent at the 3A level as there is in 4A, other than 4A teams having bigger teams with numbers.”

Perry-Koci is looking forward to running track this season, as well.

He missed last season with shoulder surgery and in his sophomore year, the school dealt with COVID.

“We’ve got some pretty fast guys, so I can’t wait to see what we can do on the track,” he said.