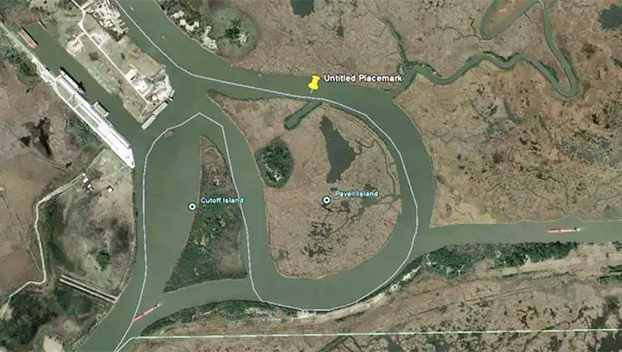 A married woman alone while her husband is gone on a business trip, or for some other reason, is not too much out of the ordinary.

She often has many ways to communicate. People nowadays have cellular phones. A lot of homes have landline telephones. A large majority of homes have computers, and a large margin of computer users are on a social network, such as Facebook and Twitter.

The ability to instant message gives those home alone the ability to “talk” to someone as though they are face to face even though they may be thousands of miles apart. The same ability is available to stay in contact with loves ones.

In the mid-19th century, this technology was not available.

A lady left alone on a remote island led to one of the strangest mysteries to occur on the Sabine River.

Two German immigrants, Augustus and Sophie Pavell had moved to Orange, looking to build a new life. “Gus,” as Augustus became known, noticed boatmen coming into and leaving Orange had to pass a small island. Often the boats would tie up to the island, waiting out bad weather on nearby Sabine Lake, or maybe they had to wait for dock space at the sawmill when they were coming to Orange to load cargo.

Gus decided he and Sophie would move to the island and build a store to sell supplies to the boatmen that used the island. By 1854, Gus had built the store and built a cotton warehouse and would often buy cotton from the boatmen and ship it to Galveston himself. He would often sail to Galveston with his cotton cargo and buy supplies for the store.

Nearly everyone that Sophie met when Gus was gone was a stranger.

When she had business at the store or the warehouse, she had company, but at night she was alone on the remote, dark island. At times boats would tie up overnight, but the boatmen stayed on the boats and left her alone. At sundown she may see a boat and its crew, but at sunrise they would leave and she would be alone until the next boat showed up.

By 1860 the business prospered. The value had grown to $10,000. Sophie was ably handling the business while Gus was gone to Galveston. He was making several trips a year.

One day when Gus returned from a trip to Orange to buy cowhides, Sophie told Gus she was going to have a baby. Gus suggested they sell and move to Galveston, but Sophie would not agree. She was happy on the island and wanted to stay. She told Gus to continue to make his trips, she would continue to run the business and be fine.

Later that year when Gus returned from a trip to Galveston, Sophie met him on the dock and told him the baby had been stillborn. She took Gus to a high point on the island and showed him where she buried the baby.

She showed Gus the small grave, which she decorated with flowers. She also had placed a small brass urn used as a flower vase. Gus ordered a small tombstone from Galveston and had this placed on the grave.

By 1861, the Civil War had caused river trade to virtually cease due to the union blockade at Sabine Pass. Gus was more than 40 years old and did not enlist, but with his knowledge of the waterways, he became a successful blockade runner.

At times Gus would sail to Galveston, travel to Houston and return to Orange by train. He would often be gone for long periods of time. Sophie would often be seen tending the small grave on the island.

Passersby would see her and often, she would tell the occasional visitor how lonely she was with Gus gone, but she understood the need for him to travel. She would gather flowers and visit the grave and often spend time there reflecting on her life.

After the war, Sophie agreed to move to Galveston. Gus made a lot of gold from his blockade running, and they could open a mercantile business at Galveston. Sophie could for the first time have a social life with church and theater attendance.

Their timing could not have been better. On Sept. 13, 1865, a hurricane blew through and destroyed the business on Pavell’s Island.

A few months after the storm, Solomon Sparks visited the island with the thought of buying it and moving his shingle mill there. As he explored the island, he went to the high point and found the excavated grave where the baby had been buried.

He found that what he supposed to have been the brass urn was, in fact, a two-feet section of two-inch diameter brass pipe. It appeared to have been sawn from a bedpost. Sparks could see the tarnished markings from the years it had been buried upright in the ground.

By the grave was the small tombstone Gus bought and installed. In the bottom of the grave he could see the markings where the casket had been. He also found a $20 gold piece.

After he returned home, Sparks began to wonder why, if Sophie had exhumed the skeleton of her small baby and taken it to Galveston, she would have left the tombstone. Why would she have not taken it to the new grave?

Sparks was puzzled. Had she really given birth to a stillborn baby? Or, had she used the story as an elaborate ruse to cover the existence of a “bank” that no one would think to look for?

Was it possible that Sophie, appearing to care for her baby’s grave, was actually making a “deposit” in her “bank?” As she placed flowers in the brass urn, was she also dropping gold coins in an otherwise empty coffin?

Did Gus know about the ruse?

No one will ever know. It is just one of the mysteries of the Sabine River and possibly the way she coped with being left alone.