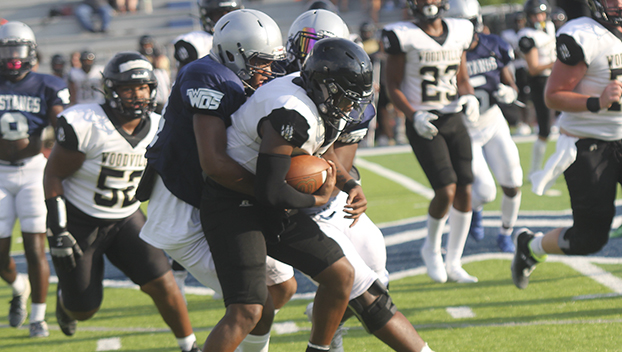 The WO-S defense devours a Woodville running back in their scrimmage. (Van Wade/Orange Leader)

WEST ORANGE – With one scrimmage down and one more to go, West Orange-Stark head coach Hiawatha Hickman likes what he has seen from the Mustangs.

The Mustangs were quite impressive in their first scrimmage against Woodville as the defense recorded a shutout of the Class 3A Eagles, keeping them out of the end zone.

Meanwhile, the Mustangs offense generated three touchdowns in the scrimmage, which was played under a controlled format for half of it and then both teams utilized the game clock in the second part.

“All-in-all, I thought the kids performed well,” said Hickman. “Our defense was outstanding, but that has always been the case around here. When you go into that first scrimmage, defense has always seemed to be ahead of the offense, no matter where you are at.”

Hickman liked the way the Mustangs defense dictated the action.

“Woodville likes to run the spread, and we’ll see that a lot in our opponents this year,” said Hickman. “They also have some outstanding athletes and are in the playoffs year-in and year-out out of their 3A league. I thought the kids held their own, especially after the first series, and we controlled the line of scrimmage. We were getting seven or eight hats at times on the ball carriers and that’s what you love to see around here.”

The Mustangs moved the ball well at times on offense, and Hickman sees improvements coming down the road.

“We really didn’t open up our playbook in the first scrimmage and kept it a little vanilla, but we plan on expanding a little more this week,” said Hickman. “I thought both our quarterbacks (Keyshawn Robinson and Marcus Turner) had good moments, especially in the running game. Jamal Shaw, he showed that he can be a beast at running back. Of course, there are those little mistakes we need to work on, like limiting our false starts and lining up right, but that is to be expected in that first action.”

The Mustangs are turning their attention to Vidor in their second scrimmage Wednesday (Aug. 17) as they will play host to the Pirates with the freshman starting at 4 p.m. followed by the JV (5 p.m.) and the varsity (6 p.m.).

“Coach (Cornel) Thompson always said, we’ve got to keep Vidor on our scrimmage schedule, because they will test you physically and you can get a gauge on how strong you are and what kind of physical shape you are in,” said Hickman. “Vidor always brings it, and Coach (Jeff) Mathews fires those guys up for each and every week. We’ve got to match that intensity. It will be the only time we see the Slot-T, at least during the regular season, so it’s going to be a challenge and the kids are looking forward to it.”

The Pirates will be the final preseason test for WO-S, which will open the regular season with a home date against the Nederland Bulldogs Aug. 26.

“Scrimmages are all about evaluating talent, especially those young kids that are on the varsity for the first time,” said Hickman. “If you make mistakes, scrimmages are certainly the time to make them. This second one is all about fine-tuning different areas and limiting the mistakes. It’s also about evaluation. There are several kids right now that we are looking at that will either be Friday night guys or will help us on Thursday nights.”

Hickman was also proud about how the kids on the subvarsity level played against Woodville.

“It’s fun to coach those young fellas, because they are the future, for sure,” said Hickman. “Those freshmen came out with big eyes and settled in pretty good. We’re looking forward to getting a whole lot out of the Vidor scrimmage. Hopefully the weather will hold up good for us, with the clouds last week, it wasn’t quite as hot. You want to keep the kids healthy for sure, limit cramps and such.”